There was a hard frost across the whole of the UK on Saturday (yesterday) morning. This will signal the beginning of the end of this year’s autumn fungi season, a full month earlier than it ended last year. It has been a memorable year, of the sort that occurs only once or twice in an average decade. 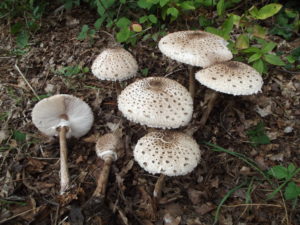 It started late. There was a fairly typical selection of late summer fungi around in mid-August, but September was dry and for some reason I won’t even speculate on, the fungi suffered even worse than normal for a dry period. By the middle of that month there were absolutely no fungi to be found apart from the woody perennials which are always present. This caused something of a backlog of species waiting to fruit. Then in the last week of September the rains came. And it rained, and rained, and rained some more. 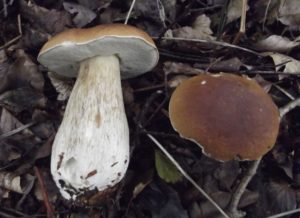 About a week into October, a wide variety of species started fruiting in spectacular style. This included a number of the larger, well-known edible woodland species, as well as some of the most visible grassland species, especially Parasol Mushrooms. This meant they got noticed, even by people who don’t usually pay any attention to our fungal friends. It was a particularly good autumn for the most famous edible species of them all: the Penny Bun (Cep/Porcino). I was still finding these today, though well past their best for eating.

Some other species had a bad year. Notably there has hardly been any Chicken of the Woods. When this species failed to turn up in the spring, I did wonder if it would fruit more enthusiastically than normal in the autumn, but I’ve not seen it at all. It had a good year in 2018, so it seems it was taking a year off. Horn of Plenty has also been very patchy, and absent in many areas. 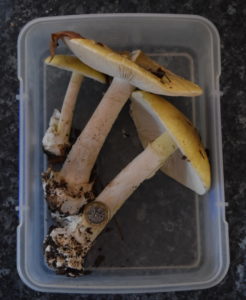 Until very recently, it was also looking like a dreadful year for the most famous poisonous species.  I found a few Deathcaps on my first private session of the year, on August 24th, but they then disappeared. Deathcaps are typically an early autumn fruiter, and so when I still wasn’t finding any at the start of November, I figured they too had decided to give 2019 a miss. Then on Thursday (Nov 7th) I was just on my way home from a session and glimpsed some fungi growing on a bank. I didn’t immediately recognise them as Deathcaps because they were enormous. Probably the biggest examples of that species I have ever seen. Today was my last session of the year, and we found another huge patch of them (normal-sized this time). 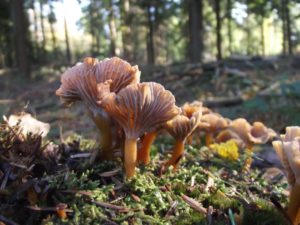 All good things come to an end, but there’s still one species out there to be found in great abundance and it will probably survive the frost. Winter Chanterelles are the last of the famous edibles to have a great year in 2019.

One thought on “2019: memorable year for fungi”