Mushroom season 2013 is now well underway, not that you’d think so if you read what is being posted on many internet forums at the moment. The pundits who predicted a “penny bun storm” turned out to be woefully wrong (as usual – the pundits are always wrong – predicting what the mushrooms are going to do is a mug’s game). There are a few penny buns (Boletus edulis, cep, porcino) about, and considerably more of their “poor relation” the bay bolete (Boletus badius). The milkcaps (genus Lactarius) are doing well, as are the relatives of the shop/field mushrooms (genus Agaricus), and in the last few days parasol mushrooms (Macrolepiota procera) have started to appear in force. Everything else is currently doing badly, and the whole show is very, very patchy. There are still long stretches with not very much at all, and then you find a hotspot with loads going on. 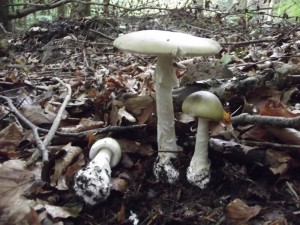 If the edibles are having an unspectacular year (so far – everything might change next week), the same cannot be said of the deadlies. At least in my neck of the woods, September 2013 has turned out to be a bumper year for the deathcap (Amanita phalloides). It’s close relative, the pure white, equally-lethal destroying angel (Amanita virosa) is also having a good year, although it is never as common as its grey-green cousin.

These mushrooms live up to their reputations. They are the most toxic fungi by a clear margin, and rank among the deadliest organisms on the planet. If you eat just one of them then you will probably die, and the next most likely outcome is that you’ll need a kidney transplant. The reason for this high level of toxicity is that the poisons contained in these fungi directly attack the organs responsible for removing unwanted chemicals from the body: the kidneys and liver. Even worse, instead of being removed from the bloodstream when they pass through mammalian kidneys, these toxins are re-absorbed, and so go round and round the system causing more damage each time. There is no antidote.

You’ll often find nibbled specimens, and somewhat surprisingly it is not just invertebrates that like them. Both deer and rabbits can eat them with impunity, because their digestive systems have enzymes which break down the amatoxins before they enter the animals’ bloodstream.

Deathcaps grow symbiotically with deciduous trees, usually oaks. Destroying angels are usually found with beech. Both are easily recognised by the presence of a bag around the base of the stem (a volva) and pure white gills that stay white. 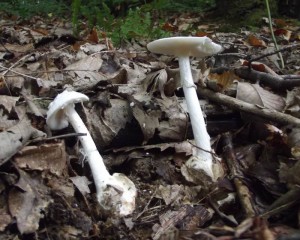 I must admit to having a morbid fascination with these two mushrooms. There is something awesome about their lethality. I’m always pleased to find them, but I can’t say I particularly enjoy handling them. Touching them is not actually dangerous – you’d have to actually swallow part of the cap to get into trouble with them. They are perhaps the archetypal example of something which disproves the rule “what you don’t know won’t hurt you.” In this case, it is only if you don’t know what they are that they can hurt you. If you know them, and respect them, then they can’t harm you.