This is a guest post by Cathy, Geoff’s wife. The last couple of weeks, I’ve been experimenting with acorns – and while those experiments are far from finished, here’s a bit about the journey so far.

It started with a book, called It Will Live Forever, by Beverly Ortiz and Julia Parker. And how we came to have that book is one of those strange things, in itself. One of Geoff’s big influences was the late archaeobotanist Gordon Hillman, and upon moving to Hastings, quite by chance, we met his daughter, Thilaka, who recently lent us this book that had belonged to him.

Anyway. It Will Live Forever is a fascinating and infuriating book about Yosemite Indian acorn processing. Infuriating because it is told in the oral tradition and for someone looking for clear and concise instructions on how to process acorns, it is rather time consuming. But once it hooks you in, you can get a bit obsessed. 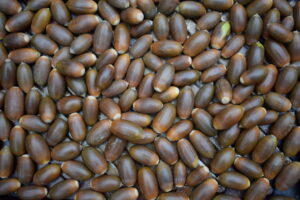 The reverence the books shows for acorns is in stark contrast to Claire Loewenfeld’s Wild Food Larder:Nuts (1957), which describes them mainly as pig fodder, but “can be used as a supplement to human food in times of need”. Interestingly, Loewenfeld’s preparation instructions don’t include leaching the tannins out, which could explain the unimpressed tone.

It’s not my first time trying to work with acorns, but my attempts last year at cold leaching yielded acorn chunks that were still bitter after two weeks of water changing, and hot leaching left me with little black pebbles that surely had lost all their nutrients.

The Miwoke/Paiute method is gentler than others I’ve tried or read about – there’s a lot of storing and waiting. They regularly store the acorns, still in their shells, for around a year – but sometimes up to ten years. That seems to be one of the strengths of acorns, they can be stored as a just-in-case food, and then processed if and when they’re needed.

I’ll do exactly what the book does not, and condense the process into a short list (I can sense Julia Parker’s frown).

So far I’ve managed to make one small batch of good flour using this method already, and I have two hoards of acorns in the airing cupboard at different stages of drying. I used my first batch of flour to make some simple biscuits, substituting a third of the normal wheat flour with acorn flour instead. I’d like to tell you it was delicious and subtly nutty, or something like that, but they just tasted as if they’d been made with wholemeal flour. Fine, with a healthy undertone. 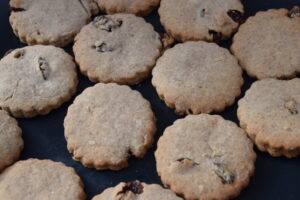 This article from Practical Self Reliance.

One thought on “Acorn flour”