I’ve had a relatively quiet summer from a foraging point of view, apart from a somewhat surreal filming session with a Japanese TV company making a documentary about “Harry Potter and Celtic/Druidic influences on witch culture in the UK”. They wanted me to find them “a mushroom big enough for a witch to sit on.” They ended up filming a large Ganoderma, which was not only big enough but strong enough for a TV presenter to actually sit on. When I left they were filming a Scottish witch chanting at the foot of an ancient yew tree. Interesting work if you can get it!

There’s been a steady stream of reports of autumn species fruiting throughout the summer – Hedgehog fungi in May, Chanterelles in June, Penny Buns in July – but mushroom season proper is nearly upon us. My first engagement of the autumn is going to be a masterclass at the Brighton Food Festival on Hove Lawns on Saturday September 6th. 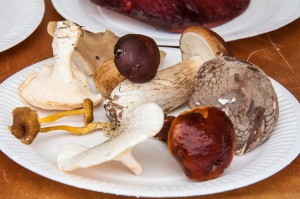 The masterclass will involve a hands-on introduction to whatever edible and poisonous fungi are around in early September.  You will see from the picture on the left that there was already quite a lot around at that time last year. Clockwise from top left: Wood Hedgehog, Oyster Mushroom, Bay Bolete, Penny Bun, Blusher, Slippery Jack, Tiger Sawgill, Winter Chanterelle.

People will have a chance to experience the mushrooms close-up – there’s nothing like touching them and smelling them to help you identify them yourself in the wild.  I will also, of course, be cooking them up so you can have a chance to taste them.

Website and booking details can be found here: http://brightonfoodfestival.com/events/sussex-foraging-fungi-masterclass/.