After an encouraging start to the mushroom season, things are very sparse now. Very few ground-fruiting fungi are about in south-east England, and the reason is that the ground has simply not recovered from this summer’s heatwave. We’ve had some bits and pieces of rain, but not the prolonged drenching needed to return things to something like normal. In many places deep cracks that had started to close are now re-opening. It is even worse in some other parts of the country: on a recent visit to Northamptonshire the cracks hadn’t even started to close, and we walked for over three hours and saw no ground-fruiting fungi at all. 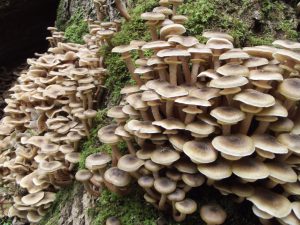 Where fungi are fruiting they are doing so in ones and twos where in a more typical year there’s be a whole patch or a large ring. Only the wood-fruiting species are doing reasonably well, and even some of those seem to be suffering. Only one good edible species is fruiting abundantly right now and that is Honey Fungus (Armillaria mellea).

In previous years when conditions have been like this at the start of October it has gone one of two ways. If a decent amount of rain finally arrives before the end of October then there could be a spectacular showing in November. But if it doesn’t then we might be looking at a write-off, and 2018 will go down as a dud year for fungi.

Because of this uncertainty I am reluctant to schedule any more public events. The ones I’ve already scheduled are almost entirely sold out, but there’s no point in me adding extra dates if it is going to be very difficult to find anything.

UPDATE 04/10/2018: Some signs of improvement today. A second flush of parasols and a fresh penny bun coming through. Not brilliant, but better than I expected.

UPDATE 11/10/2018: I have added an extra date at Mill Wood, on the hope that so many things are currently missing that if we do get some decent rainfall soon, early November should be pretty good.

One thought on “Desperately need some rain now…”