The amanitas are the first group of mushrooms a forager must know about, because it contains the two deadliest species in the world, both of which are native to the UK. There are also several edible species, but none recommended for beginners. 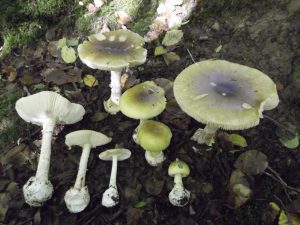 The toxins in this fungus attacks the liver and kidneys, and are also re-absorbed by the kidneys instead of being removed. Ingestion is usually fatal. Death caps grow in woodland, usually oak. They are frequent in southeast England, and sometimes locally very abundant. The destroying angel (A. virosa) is just as lethal, and differs from the death cap mainly in being pure white all over. 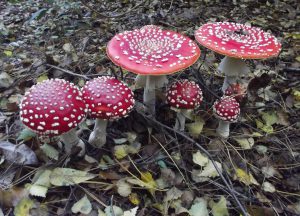 The most famous wild mushroom – the one that Alice’s caterpillar sat on, smoking a hookah – the ultimate fairytale toadstool. The fly agaric should need no introduction, although I am surprised at how many people aren’t sure it’s even a real mushroom, and not just a myth, or don’t realise it is native to the UK. It is in fact widespread and abundant, particularly with birch. It is, contrary to what many sources report, edible, although only after extensive preparation to remove the water-soluble toxins. Without this process it is both nauseating and hallucinogenic, which must be a combination straight from hell. The name derives from its traditional use as an insecticide. 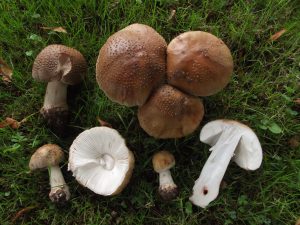 The blusher is one of my favourite mushrooms. It’s a good eater, but I passed it by for many years for fear of mixing it up with the much rarer panther cap (A. pantherina), which you don’t want to eat for similar reasons as the fly agaric (this one is even worse.) It is not recommended for beginners for precisely this reason. There are a number of ways to tell them apart, most obviously the thing that gives the blusher its name – the flesh slowly turns pink when exposed to oxygen, and the whole mushroom sort of “blushes.” There are also several other brown amanitas, of dubious edibility, that could be confused with a blusher, so take care.

It also has to be properly cooked, because it is toxic raw. I find this puts some people off, but it is no different to eating something like chicken.