This is a rather primitive family of fungi, many of which are highly-prized delicacies. The first larger fungi were simple “clubs” – a fat stem with no cap and the spores released straight from the surface. The next stage was wrinkles on surface to increase the spore-releasing area – the precursors of gills. After that the top of club flattened, to offer some protection from the elements to the spore-producing surface, and at this point we’ve got something that looks like this family of mushrooms. A proper cap with the gills underneath (rather than running down the stem) came later, and the pores/tubes of the boletes even later still. 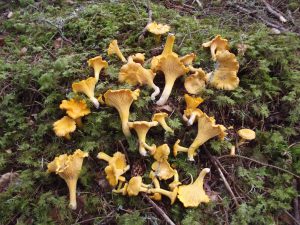 The best known of the group is the chanterelle itself, a once-common fungus which has suffered to some extent because it is very easy to spot and identify as well as being well known and highly prized. It is collected so eagerly and so comprehensively that it is hard to get a clear idea of how common it is (now), since there are not enough places you could take records where collectors are not likely to have taken at least some of them.

The other really important genus is Craterellus. The winter chanterelle (or trumpet chanterelle) (Craterellus tubaeformis) is much easier to find in Sussex, not least because it is much harder to find! Winter chanterelles, as their name suggests, appear in the late autumn and early winter, just as the chanterelles are finishing (and they started in the summer.) They are to be found in pine woods, under bracken, and from above they are very well camouflaged – all you see is a dirty brown circle with ragged edges. Spotting the first one is therefore not easy, especially if you aren’t particularly looking for them. After you’ve found one, you’re likely to find many more. But the very fact they are not bright yellow and screaming out their presence to any passer-by means that they are, in the end, easier to find. 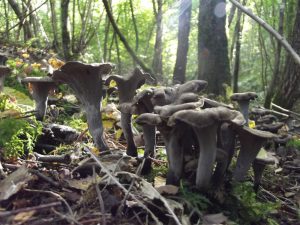 The same cannot be said of the other one, which as well as being much less common is even harder to spot – it is said to be like looking for holes in the ground, and with good reason. In fact I had got to the point with Craterellus cornucopiodes – the horn of plenty or black trumpet – where I’d given up any real hope of finding it, not that I’d stopped looking. I walked straight past the first ones I ever saw in the wild before an eagle-eyed foraging student saw them. It also lives up to its reputation where tastiness is concerned – this fungus is absolutely delicious. 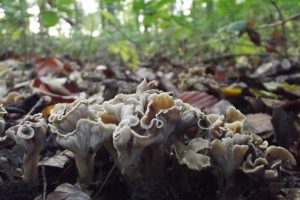 There are other excellent edible members of this family in the UK, but none of them are common or well-known. Wavy-capped chanterelles (Pseudocraterellus undulatus) are the most common of these, at least in south-east England.