Hygrophoraceae is a family of gilled fungi containing two genera of interest to foragers.

This is a genus of woodland-dwelling mushrooms that you might not think were edible at first sight. They are slimy, have something about them that suggests they might be better left alone, and there is no great history of eating them in Europe. The best known is the type species Hygrophorus eburneus (Ivory Woodwax), which is combined by the Chinese with yak’s milk and bacteria to produce something akin to a mushroom yoghurt drink. 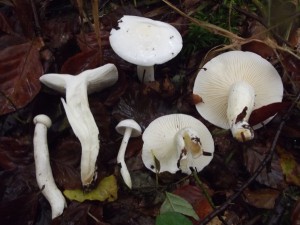 I find them quite regularly, but not having access to yak’s milk I just fry them if I find them in collectable quantities. Another notable edible species is called herald of winter (H. hypothejus), and its name tells you why it is notable. 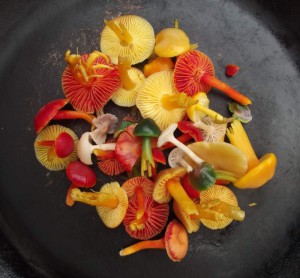 The other group is more familiar, not least because many of them are amongst the most eye-catching of all fungi, and are not easily forgotten once seen. The Waxcaps are small, grassland fungi (in the UK at least – in other climates they are more likely to be found in woodland), some of which are rare and most of which are important indicator species of ancient, undisturbed grassland habitat. This ecological importance, along with their elegant beauty and generally small size, means that they don’t find their way into my frying pan very often.

The picture shows four species of waxcap, all of which were found growing within a few metres of each other. They were abundant in this location, and I decided to pick them because they’d set up home in the area behind the goal of a village football pitch, this was a Friday afternoon and their life expectancy did not extend very far into the weekend. All of these are also relatively common (Scarlet waxcap (Hygrocybe coccinea), golden waxcap (H. chlorophana), snowy waxcap (H. Virginia) and the green/technicolor parrot waxcap (H. psittacina)).

Regarding safety of identification, there are no dangerously-poisonous waxcaps, but you could get into serious trouble if you pick some other small grassland mushrooms that look like they might be waxcaps, but aren’t. I can certainly imagine somebody mistaking Clitocybe rivulosa for a waxcap, and that one can kill you.