This is a family of wood-munching fungi which produce large troops or clusters of mushrooms on dead and dying trees and shrubs. 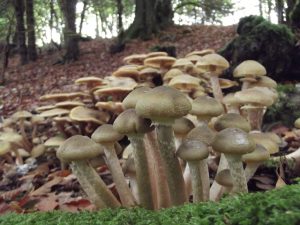 One of them is among my all-time favourite edibles, as well as being the bane of foresters and gardeners because of its tendency to invade gardens and forests and take out any weakened tree or shrub that takes its fancy. Honey Fungus (Armillaria sp.) is one of the few parasites which can kill its host and then continue to thrive on its rotting corpse. It also has the ability to spread itself about via underground “bootlaces”, and once it is established in an area it is almost impossible to get rid of until its finished doing what it does. Honey fungus was once just considered to be one species, but numerous variations are now recognised so the term “honey fungus” can refer either to the whole genus or just to A. mellea. They all come with a warning, because this is one of the species that is known to cause bad reactions in some individuals. Some of the species are 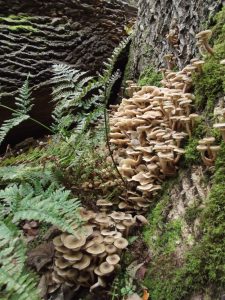 more problematic with others, and according to some sources one of them (A. cepistipes) causes additional problems when consumed with alcohol. I have personally consumed this species with alcohol without experiencing any difficulties. Nevertheless, it is always advised to make sure honey fungus is well cooked, because cooking destroys some of the toxins. This is also good advice from a culinary point of view, because the caps are quite tough and can stand up to some serious treatment and come out tasting rich and juicy. I usually put them in the roasting dish with a joint of fatty meat and let them sizzle for an hour.

Honey fungus is not for complete beginners. The genus as a whole is confusable with quite a few other sorts of fungi, including some you are definitely not advised to consume. However, since A. mellea is very common and usually produces a lot of fruit bodies, it is worth putting some effort into progressing to the point where you feel comfortable collecting it. Definitely under-rated. 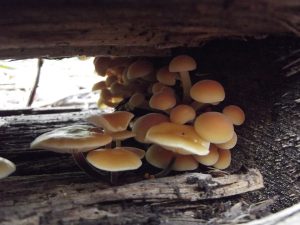 Another member of this family appears at the very end of the main mushroom season. It is the only mushroom that specialises in fruiting when the weather is bitterly cold, and can regularly be found when there’s snow on the ground. It can even survive being frozen solid and continue to produce spores after the thaw. Velvet Shanks (Flammulina velutipes) are cheerful orange mushrooms with black, velvety stems which give rise to their common names. They are a bit slimy, and perhaps not the tastiest of the well-known edible fungi, but their fruiting season means they are sought by foragers anyway. If they fruited during the main season then they’d probably come with a serious warning regarding safety of identification, but if you find something that looks like these during freezing conditions then you can be fairly confident that you’ve got the real thing.

This species is cultivated in Japan, but you’d never guess it to look at what you get when you buy them in a shop. “Enokitake” look more like spaghetti than mushrooms. They consist of long, white strands with tiny little undeveloped caps on the end. There is a clue to what is going on in the above picture. Most of the mushrooms are typical wild velvet shanks, but if you look at the underside you will see some smaller specimens that have been restricted by the others spacially, and deprived of light. The Japanese must have decided that these were the best to eat, and so they worked out a way to cultivate the in the dark, in tight cylinders and with a high level of carbon dioxide. The result is enokitake. 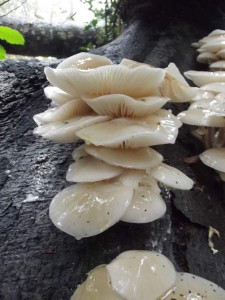 Otherwise known as “Poached Egg Fungus” (Oudemansiella mucida), this is a personal favourite of mine. It’s not the best in terms of edibility, but it can put on an impressive display in the autumn, sometimes covering entire fallen beech trees. This was one of the first edible fungi I ever found and identified. My first ever car, a gold Renault 12, which I’d had for eighteen months and not so much as scratched, was written off by a large beech tree that fell during the Great Storm of October 1987. A year later this same tree, now horizontal, was covered in Porcelain Fungus.