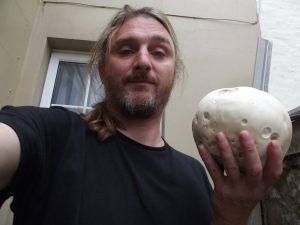 The Giant Puffball (Calvatia gigantea) is one of the best edible fungi of all. I do sometimes find them in Sussex, but they seem to be more abundant further north.

All of the puffballs are edible when still young and white. Some care must still be taken, though. Beginners might well confuse an earthball (Scleroderma) with a puffball, but earthballs are black inside from very small and taste foul. They are also very, very common, so it won’t take long to get to know them. A much more dangerous mistake involves a very young death cap (Amanita phalloides) or destroying angel (A. virosa), which can look like a small puffball before emerging from its veil. As a result, beginners are advised to cut them open to make sure there is no mushroom developing inside. 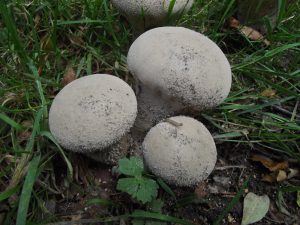 Another large puffballs that makes good eating is the Pestle Puffball, so called because its “stalk” does not decay, but instead persists detached, looking a bit like a pestle. This species is only “large” in comparison to the smaller puffballs – even the biggest Pestle Puffball is a minnow compared to a large Giant Puffball.

Nearly all puffballs grow on the ground, either in grassland or woodland. There is only one exception to this – the Stump Puffball, which grows on (you guessed it) stumps, making it the easiest of the small puffballs to identify to species. This one is only edible when very young, becoming very chewy before the spore mass starts to turn yellow (eventually beoming brown). 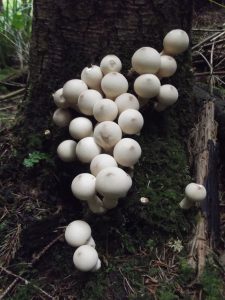