Russulaceae is a family of mushrooms which includes two large genera which have the following in common:

There are loads of them.
They are symbiotic with specific sorts of tree.
They appear late summer to late autumn.
Many are hard or impossible to identify to species without microscopy/chemicals.
None are seriously poisonous, but a few will make you sick.
Many taste acrid and/or hot, some are edible, some used as flavourings, one or two are choice. 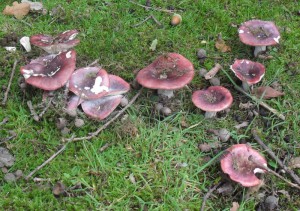 After you’ve met your first few russulas, you’ll (usually) know a russula when you find one (but there are one or two curveballs, and whatever you do don’t mistake a death cap for a green russula…) Identifying most of them to species is not easy. The most obvious distinguishing feature is cap colour, but this on its own can be misleading, because many of them have variable colours anyway. Smells are also important, as is the taste and the distance towards the centre that the cap can be peeled off.

You start with the cap colour. 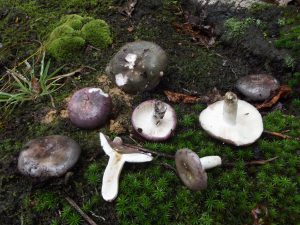 The Charcoal Burner. Its multicoloured cap is distinctive. This is probably the best edible Brittlegill.

The milkcaps are easier than the russulas only in the sense that the two best eaters are fairly straightforward to identify (although there are some rare close relatives of unknown edibility.) The rest are harder, and most of them aren’t worth bothering with unless you are finding lots of them (which makes it easier to work out what they are.) 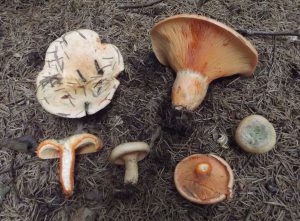 Highly prized in some parts of Europe (why not all I do not know), saffron milkcaps always grow with pine and stain a rather alarming green colour when knocked. This can lead people to think there is something wrong with them, and assume they aren’t edible. But it is the way they are supposed to look and once you’ve tried eating them you’ll stop caring about their unusual colour scheme. L. deliciosus has a close relative which always grows with spruce – the false saffron milkcap (L. deterrimus)(shown here). This species has an even greater tendency to turn a sickly colour, and is slightly more bitter, but certainly worth eating and often available in abundance when you find them. The rest of the genus is a bit of a quagmire for hopeful foragers, at least those who believe in being certain of exactly what they are eating. In some European countries most of them are eaten, although sometimes special preparation is required. Some are widely listed as “inedible” without any explanation of why they can’t be eaten. Not for beginners.