Here’s some edible fungi that don’t fit so easily into the major groups mentioned on the other pages. In most cases, their distinctiveness means they are good species for a complete beginner to go looking for, because there’s such a low probability of getting them mixed up with anything else. This does not apply to the first one. 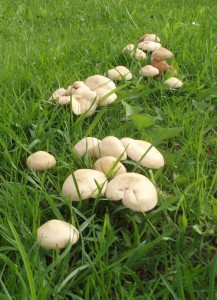 Very common, widespread (look out on grassy roundabouts near you, even if you live in central London) and available from early summer to the middle of autumn, fairy ring mushrooms are very good to eat. They are not recommended for beginners because they are regularly confused with the very dangerous Clitocybe rivulosa, which is about the same size, and also grows in rings in grassland. The two species regularly turn up in the same place at the same time. 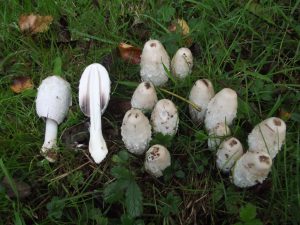 The first species many wild mushroom foragers ever find for themselves and try eating, shaggy inkcaps (or “lawyer’s wig”) appear in mid-autumn by paths and roadsides, on lawns or on recently disturbed ground. They are often associated with buried wood. They can only be eaten when still completely white, and do not keep for very long. The term “inkcap” is scientifically redundant, the old Coprinaceae family having recently been broken up on the basis of genetic evidence. This species has been moved to Agaricaceae, along with the parasols and puffballs. 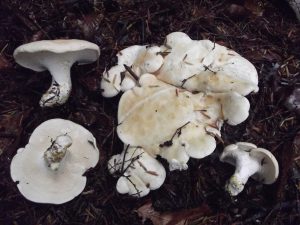 The only thing you could get this mixed up with is its slightly smaller, browner relative the terracotta hedgehog (H. rufescens). Both are good edibles, and highly prized in parts of Europe. It has spines instead of gills, and while there are a few rare spined fungi you can’t eat, you are unlikely to find them in most parts of the UK and they look different to these two species anyway. Hedgehog fungus is also one of the more reliable species – I usually find it in reasonable abundance regardless of whatever is happening to the other fungi. The slugs don’t seem to like it much, and neither do the insect grubs. 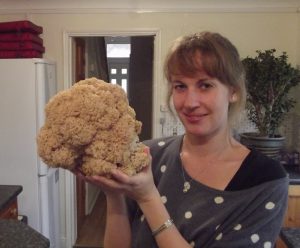 Nothing else looks like a cauliflower and grows at the base of pine trees. You can’t get this one wrong (famous last words I know, but in this case you really can’t.) It’s an excellent edible species, but requires very careful cleaning because everything that crawls or slithers in the forest likes to set up home in it. You can just break it into pieces, immerse it, and wait for everything to crawl and slither out of all the nooks and crannies. Worth the bother, but make sure it is allowed to dry before you cook it.. 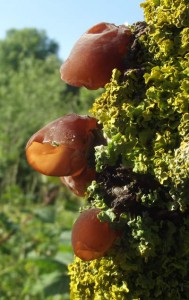 I saw someone get this wrong on the internet recently, so it’s not completely foolproof, but this is another beginner-level species. I refuse to bow to the forces of political correctness and start calling this fungus “jelly ear”. I’m sorry, but “jew’s ear” is a direct translation of the latin name, so unless we’re going to change that too, I shall continue to call it by its true name. I don’t understand why it is considered offensive to jews, since nothing negative is being inferred about jews or their religion. The name derives from its liking for elder trees, from which Judas supposedly hanged himself. The main danger posed by this rather odd-looking fungus is not poisonous lookalikes but its habit of exploding during cooking. Whatever you do, do not try to fry them whole! 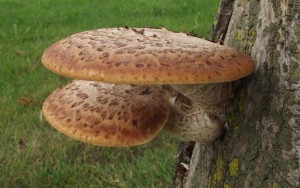 Dryad’s saddle is not the most famous of the edible wild fungi, and passed over by some as not worth collecting. I disagree, and believe this to be a good edible when young and fresh. As it becomes older and larger (sometimes very large indeed) it becomes inedibly tough and should be left alone to impress passers-by and feed the local wildllife. 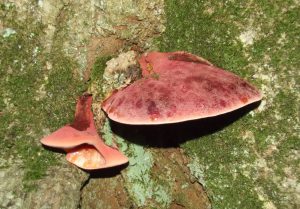 This is a true British speciality – only really common in these islands – and probably the weirdest of all the edible fungi. These islands are the only place it is common. It looks like a slab of raw meat, tastes like some strange sort of fruit and is impossible to mix up with any other fungus.

2 thoughts on “Some of the others”