“Boletus” is an important genus of pored/tubed (instead of gilled) mushrooms, including the undisputed king of edible fungi – Boletus edulis, called by the English more often by its French or Italian name (“cep” or “porcino”) than by its proper English name of “penny bun.”

“Boletaceae” is the family this genus belongs to, which consists mainly, but not entirely, of other pored/tubed mushrooms. Most are symbiotic with trees.

“Bolete” is a non-scientific term for any mushroom with pores/tubes.

There are three main genera of bolete which are of great interest to foragers, because most of the species are edible and only one or two are poisonous and these are relatively easy to avoid. It is also for this reason that many beginners start here. 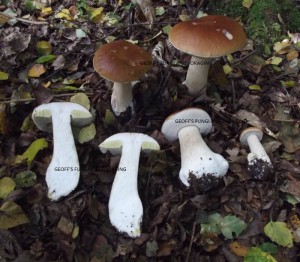 Along with the penny bun this genus contains some of the best edible wild fungi, although many of them are quite hard to find. There is one other species which is usually more common than a penny bun, and rivals it as a quality edible. It is called a bay bolete (B.badius), and is easily recognisable by a dark brown cap and yellow pores which stain blue when pressed. It also has a distinctive smell which leads some people to rank it as even better than B. edulis. I’m certainly always pleased to find it. 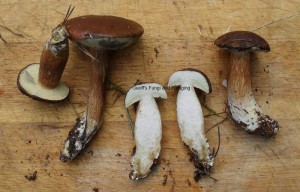 Beyond these two species it becomes increasingly difficult to identify which species you’ve got, and anything with brightly-coloured pores or exhibiting radical colour-changes to the flesh when cut open should be treated with caution. Many of the technicolor boletes are edible (at least when cooked), but you’ve got to be a bit careful if you’re going to experiment with these. 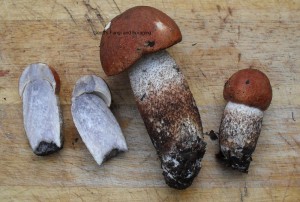 The leccinums tend have longer, thinner stems than their boletus cousins, and these stems are usually covered in downy scales. Identifying to species is not easy, and usually you have to just guess, based on the colour of the cap and associated tree. One pale brown species, which grows in mossy, boggy places, should be avoided on the grounds of rarity (ghost bolete – Leccinum holopus) but the rest, which are either brown or orange, are all edible. None of them quite make it into the same class as the best of the boletes, but they are relatively common and very widely collected. They are often dried, both to cope with the amount of them that are sometimes available, and because this improves the flavour. Some are poisonous raw, and change colour when cooked. 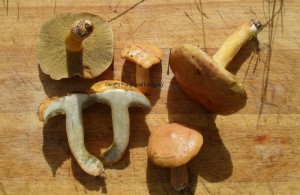 The last major group of boletes are softer than others, slimy when wet and grow in association with conifers. Probably the best known of these is called a slippery jack (Suillus luteus), which always appears near Scot’s pine. Some people consider this a good edible, others find it just a little too slippery; it’s another one that is better dried. One species (S. bovinus – jersey cow bolete) is particularly prolific, and in a good year it carpets conifer woodlands all over Sussex. There are numerous other members of the genus, all of them edible, none choice.