The parasol mushrooms are members of the Agaricaceae family, which also contains the Agaricuses and puffballs. All of these are saprophytes, growing both in grassland and woodland. 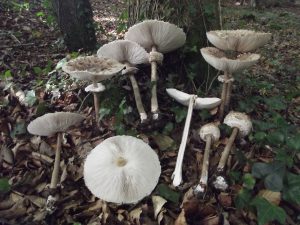 The (original) parasol mushroom is both the best known and the best eater, and is on the short list of species that a complete beginner can safely go looking for and stand a good chance of finding. They usually grow in grassland, but also often by the side of roads and sometimes also in woodland. They are large, and could only conceivably be confused with one of the other parasols. They have a north american relatives which has green gills – and which will turn you a bit green around the gills – but this species is tropical and can only be found in the UK in glasshouses, usually containing imported plants.

The only species you might mix this up with in Europe used to be called the shaggy parasol (Clorophyllum rhacodes). This species has now been split into three, with two new species called a Brown Parasol (C. brunneum) and Conifer Parasol (C. olivieri). 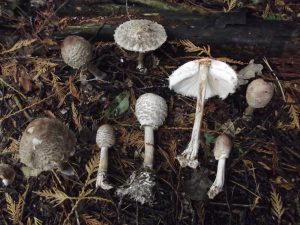 It is worth noting the difference between Macrolepiotas and Chlorophyllums, because the latter are among the species which are well-known to cause gastric/allergic reaction in a significant minority of people, so you need to be a little careful until you’ve established that you are not one of the afflicted few. Macrolepiotas have a snakeskin pattern on the stem, Chlorophyllums do not. This is the Conifer Parasol (Chlorophyllum olivieri).