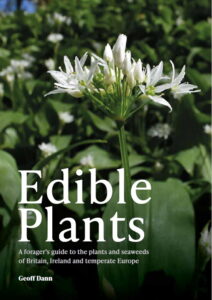 Edible Plants: A forager’s guide to the wild plants and seaweeds of Britain, Ireland and temperate Europe will go on general release on January 15th 2022. This book will be 512 pages long, and sewn thread bound (the highest quality binding, allowing the book to open flat, and making it built to last). Full colour throughout, and covering absolutely everything of relevance, including 25 seaweeds and over 450 edible and poisonous plants. The RRP will be £25. We will be supplying pre-release copies from late November at RRP (p&p free). You can pre-order a signed copy now. We will send out these pre-release copies as soon as we take delivery. Please email me (geoff@geoffdann.co.uk) if you would like a personalised message. It will initially only be available in paperback, but we do have plans to bring out a hardback version at a later date.

The text of the introduction is below. Sample pages from the inside of the finished book will be available in September.

A new age of food insecurity is dawning, such that few living Europeans have experienced. Perhaps we sense it somewhere deep inside, for interest in wild food has been growing in recent years – albeit more as a hobby or high-cuisine curiosity than a precaution against famine. But in 2020 our supply chains creaked, our supermarkets showed the strain, and foraging began to re-enter our collective consciousness as a survival skill.

This is the most comprehensive colour-illustrated book ever published on foraging for plants and seaweeds in Northwest Europe. Though most of the species covered are wild, it also includes edible ornamentals and agricultural/horticultural escapes.

Foraging books can’t be field guides. Field guides need to super-efficiently cover as many species as possible using abbreviated jargon. Foraging books focus on the edible and poisonous, and must also supply information on their culinary uses and/or toxicity. This book includes the most dangerous poisonous species and everything worth eating, and the identification information is provided with foraging safety and usefulness in mind. If you want to identify unfamiliar species in the field, then you need a field guide. I wouldn’t advise trusting an app with your life, but perhaps I am old fashioned.

Some foraging books do also delve into herbal medicine. This one occasionally mentions medicinal uses, especially in cases with undisputed scientific evidence of efficacy and no known hazards, but medical herbalism is a large and complicated discipline, and I have no medical training. That said, some illnesses are caused by poor nutrition, many foraged plants and seaweeds are rich in vitamins and minerals, and that is a topic very much within the scope of this book.

Over the past decade, I have attempted to find and photograph in their natural habitat as many of the relevant plants and seaweeds as possible. Inevitably some eluded me, and where possible I tried to grow these in my own garden. Cultivating wild plants has the added benefit of allowing close observation of their whole life cycle, as well as making it considerably easier (both physically and legally) to dig them up and experiment with their subterranean parts.

I have included some recipes, most of which are traditional. A few are more modern, and a handful are sufficiently original to be called my own creations. For the better known wild species, hundreds of recipes can be found online.

It is also customary for foraging books to contain a short section on the cultural significance of foraging. Chapter one is an account of how and why human beings originally abandoned hunter-gathering, and the long-term consequences of that fateful revolution. Chapter two is about foraging in the 12,000 years since then, the long decline of old traditions and the rapid rise of new ones since the 1970s. It is also about sustainability and long-term food security; this book is intended to be a practical guide for finding and using emergency foods in an uncertain future.