A lot of food plants are primarily used for their flavour or scent, rather than to provide bulk for the meal. 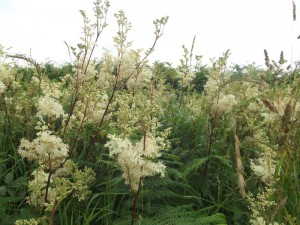 The name is a corruption of “mead wort”, and the flowers can be added to jam, where it provides a gentle almond flavour.  Traditionally it was more important as a flavouring for alcoholic drinks (beer, wine and mead.) It has also been used as a “strewing herb” (spread on the floor as a sort of air-freshener) and as a constituent of potpourri.  It was also traditionally used as a remedy for headaches and more recently has been found to contain chemicals which led to the development of modern non-steroidal anti-inflammatory drugs.  A multi-purpose plant if ever there was one! 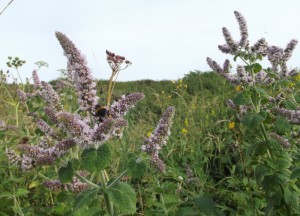 There are lots of different species of mint growing wild in the UK, plus several common hybrids. The result is a bit of an identification nightmare, at least from a botanical point of view. From a foraging point of view, because there are no poisonous mints, knowing precisely which species you’ve got isn’t quite so important. This is one of the easiest to identify, both from the flowers and the smell. Spearmint is named after the spear-like “racemes” of flowers, but the smell is instantly recognisable as a flavouring for chewing gum.