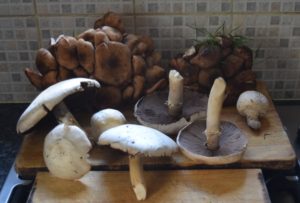 Horse Mushrooms and Honey Fungus (plus one solitary Salt-loving Mushroom on the right), 30/10/2018

After a difficult few weeks, there has been a recovery of of sorts. Two weeks ago most of the country was deluged with rain, and in many parts this has been enough to bring out a second flush of some species that had already fruited, as well as helping the species that typically fruit late in the season anyway to have a better year than might otherwise have been the case. Yesterday I found a beautiful second flush of Horse Mushrooms (Agaricus arvensis) in a place they’d already fruited in August (and in perfect condition, not an insect grub in sight, because the insects have gone for the year). I also found a massive and quite fresh fruiting of Honey Fungus (Armillaria mellea). Both of these were in the Westerham/Biggin Hill area of north-west Kent. There’s still very little to be found in the far south-eastern corner of Kent and Sussex though, since the deluge did not quite reach us. There have been some spits and spots since, so it may yet improve here too.

Overall, 2018 will not be remembered as a vintage year for fungi. I am looking forward to next year now, and some details of next year’s events are available for people wanting to buy Christmas presents.  Specific dates will be available at some point in the next month.