Happy Easter, and let’s hope we’re finally seeing the beginning of the end of this covid nightmare. I took my first group of the year coastal foraging on Friday, and it was just about the most exciting thing to happen to me since last November. 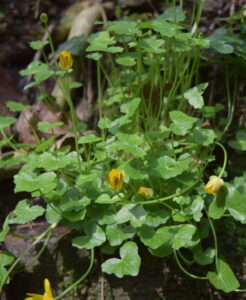 It is illegal to uproot wild plants in the UK, unless you have the landowner’s permission. As a result, various wild root vegetables tend to get overlooked. There are a few, though, which are sufficiently common as garden weeds that we ought to pay more attention to them, especially when they are as nutritious as the tubers of Lesser Celandine. They do also sometimes wash out of the soil on their own (see below).

Lesser Celandine (Ficaria verna syn. Ranunculus ficaria) is a small perennial herb (to 25cm) with fleshy, clossy, long-stalked leaves, with cordate bases, some of which develop dark markings. They have solitary yellow flowers, and on some plants there are small bulbils in the leaf axils. They are found in damp woodland, scrub, meadows, grass verges, hedgerows and gardens, and they are abundant throughout the British Isles. The leaves could be confused with several other plants, although I can’t think of any seriously poisonous lookalikes. 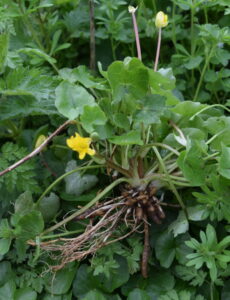 The raw leaves, which are rich in vitamin C, are edible before the plant has flowered (winter and early spring), and are used as a mild component of a mixed salad, or cooked. The flower buds can be eaten, and pickled like capers or Marsh Marigolds. The leaves and flowers become increasingly laden with protoanemonin after the plant has flowered, but the later leaves can also be used as a cooked leaf vegetable.

The plant has a cluster of small tubers (it was historically known a “pilewort”) which become edible (cooked) as the above-ground parts of the plant begins to die off. They’re too tough before then. The bulbils are also edible cooked. The tubers take a lot of work to clean. 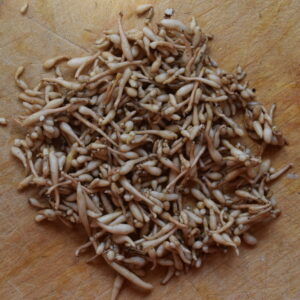 After digging up, you will need to detach the tubers from the root ball, and then clean off all the mud. The inedible bits (mud, roots and dead tubers) either dissolve or float in water, so repeated immersions and use of a sieve eventually leaves you with just the edible bits. These are like miniature, waxy new potatoes. They should be sautéed in butter, with a little cornflour added to thicken, then seasoned and served – crunchy, tasty and nutritious. Alternatively they can be boiled in salt water then stored in vinegar, and used as an accompaniment to cured meats. Preserved in this way, they last for over a year.

Charred Lesser Celandine tubers have been found at several Neolithic archaeological sites in Northern Europe, including the British Isles. It is possible our ancestors didn’t even have to dig them up. Historical European sources describe large amounts of the tubers being washed out of soil by heavy rain as “rain of potatoes” or “heaven’s barley”.*