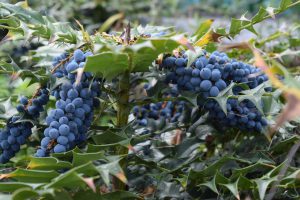 I’m still experimenting with this one. Oregon Grape (Mahonia spp.) berries are edible, not unlike sloes, available at a completely different time of year, and so seemed like a likely candidate for making a sloe-type gin out of. So far the results have been even better.

These berries are available in large quantities if you go to the right place (which is often outside the front of supermarkets). They are a bit unpredictable in terms of which bushes produce the largest crop in any one year – there are about twenty bushes outside my local Asda which last year were overloaded with berries, whereas this year those bushes were a bit sparse but those outside of another local supermarket are very well endowed as of this afternoon. The timing is fairly consistent though – they are just ripening along the English south coast now, and will be doing so soon further north. 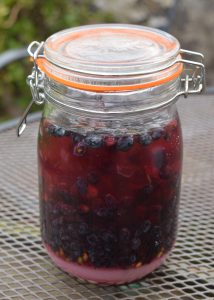 They are not native to Europe (they come from north America, hence the name) but are widely planted as ornamental shrubs and occasionally occur as escapes. Identification is not a problem – the only thing you could conceivably confused them with, fruiting in late spring, are other members of the Berberidaceae (Barberry family), which tend to have much smaller leaves and none have poisonous berries. Collecting them is relatively easy, although do be a bit careful to avoid the spines on the leaves (they are also called “Holly-leaved Barberry”), and be aware that the juice will stain your hands and clothes deep purple.

The gin they make looks like Sloe Gin, but tastes rather different. Very much like pomegranate, and in my opinion better than Sloe Gin. Making it is very easy, but you do have to wait a while for it to be ready. There are only three ingredients – berries, caster sugar and gin. The gin does not need to be of high quality – cheap stuff will do the job just as well. The proportions are something of a matter of taste, and I am yet to decide on exactly what I prefer. As a rough guide, there should be at most the same weight of caster sugar as berries, and at least 3 parts sugar (by weight) to 5 parts berries. Today I used 250g of berries, 180g of caster sugar and about 600ml of gin. 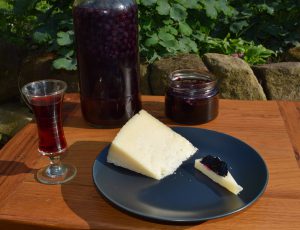 The method is simple, but there are options. First wash the berries. Then you need to break the skins. This is why sloes are supposed to only be collected after the first frost, but that is not the only way (and is not an option for Mahonia berries collected in May). You can also simply freeze them, then allow them to thaw, or prick individual berries with a cocktail stick (or a sterile needle if you are a purist). I just put them in a bowl and used a fork to transfer them to a (sterile, if you are a purist) kilner jar (by spiking them on the prongs, not scooping them, obviously). Then add the sugar and gin to the jar, seal it, and shake well. Now all you need to do is store somewhere cool and dark, and shake it every now and then, and it will be ready in a couple of months.

As you can see from the picture, there are also other uses for these berries, including making a lovely jelly/jam which works just as well with cheese, with game or on a slice of toast.