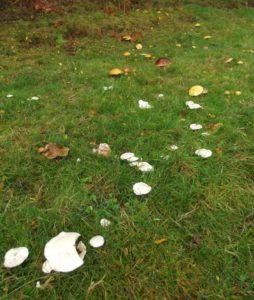 Larch boletes, The Miller and a Penny Bun

Well, that was a while coming. Two weeks ago, for only the second time in ten years, I had to start cancelling events because of a lack of fungi. There were no ground-fruiting species at all, and not much wood-fruiting species either. Then it started raining, but not much happened. By last weekend there were Fly Agarics in some places, but very little else. On Wednesday I took a group out and in three hours we found a grand total of two Hedgehog Mushrooms and one Bay Bolete. I postponed Thursday’s session.

Then, some time between Wednesday night and Saturday morning, the fungi exploded into life. Masses of boletes, parasols and many other species, and the biggest glut of Field Mushrooms I’ve ever seen. So it seems now I have a very good measure of how long it takes for the ground-fruiting fungi to respond to a major soaking after a drought-induced mushroom famine. The answer is between 11 and 13 days.