I am not, and never will be, a medical herbalist/mycologist.  My primary area of expertise is finding and identifying wild fungi and plants, closely followed by knowledge of how to use them as food. But I’m also interested in “bushcraft” in a much wider sense, and that includes all sorts of usage of wild species, which must in turn include their medicinal uses.  The job of a medical herbalist/mycologist is, however, radically different.  It takes many years to become competent at this job, and requires a deep knowledge of human physiology and illness, and related psychological factors, and a detailed understanding of what to prescribe for which complaint, and what dosage might be appropriate in any particular case.  I have too many other things to learn about to be able to devote the amount of time required to do that job.

Having said all that, if I’m going to be wandering around the countryside in search of edible/useful fungi and plants, then I’m inevitably going to come across species which have traditionally been used medicinally.  It is still useful to be able to supply the raw material, and allow the person I’m supplying it to, or their medical advisor, to decide upon precise prescriptions and dosages.  These are two different skills – there is no reason why a medical herbalist should spend a lot of time roaming the countryside in search of raw materials.  Their time would probably be better spent learning all the stuff I’ve just said I have no intention of learning!

So, just as an introduction and no more, here are three plants of medicinal interest. 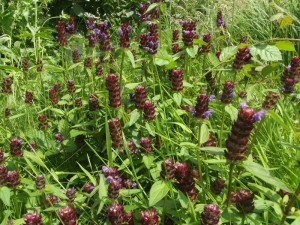 The name is a bit of a giveaway. Self-heal is not just a medical plant; it is also edible as a salad leaf, albeit a little bitter.  It’s also pretty enough when in flower to warrant a place as an ornamental plant in a wild garden.  Traditionally this plant was prescribed for so many different conditions that it would be pointless listing them all.  It is not used so much in modern, western herbal medicine, but has been the focus of recent scientific research, which suggests it has anti-biotic, anti-viral and  anti-tumour properties, as well as containing anti-oxidants and possibly lowering blood pressure. 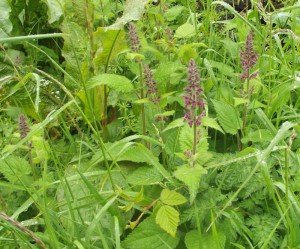 Traditionally also called “all-heal”, this is another wild plant whose name gives away it’s historic medicinal use.  Hedge woundwort, as the name suggests, is a wound-healing herb.  It is an antiseptic (scientifically proven) and it stops bleeding. 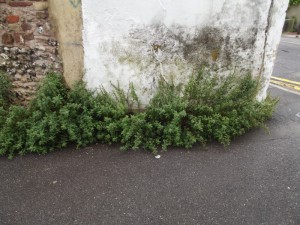 Urban herbalism! This is a plant that lives up to its name.  It can be found in many places all over southern Britain, and almost without exception, growing from the base of a wall. In terms of medical uses, it is a diuretic and laxative and has been used both traditionally and in modern herbal medicine for the treatment of various urinary and kidney disorders, including kidney and bladder stones.