I was already planning on writing a blog entry about the goosefoots and the oraches (pronounced oraks, I have recently learned), but yesterday something turned up that really sealed the deal. It was supposed to be my day off (from foraging), and I was en-route to the beach when I spotted something interesting (it was hard to miss) on a scruffy roundabout in Newhaven. I initially assumed it was some sort of goosefoot, although I didn’t know which. I now know it was a species that appears in none of my foraging books, nor in my wild flower key.

I was going to call this entry “Amaranthaceae”, after the family of plants these two genera belong to. This group comes into its own in the summer, and they are nearly all edible. Most are annuals, and they don’t start growing until the end of spring, and are at their best for collecting from about now until mid-summer. In addition to the goosefoots and oraches, there are several other important species. The glassworts (marsh samphire) look nothing like the other members of the group – or anything else for that matter. Sea purslane, which dominates salt marshes around much of the coast of the UK, is also easily distinguished. Sea beet is very common, and a good one for foraging (unsurprisingly, given that it is the wild ancestor of beetroot, sugar beet and chard). Amaranth itself is a genus of plants well known as a cereal crop, native to the Americas but introduced into the UK and often found growing in waste ground alongside other members of the family. But the blog entry I was planning to write was about the goosefoots (genus Chenopodium) and oraches (genus Atriplex). 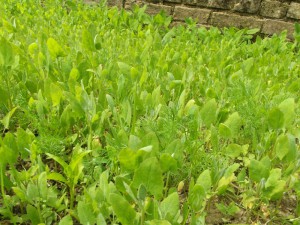 A sea of young goosefoots/oraches. Could be fat hen, could be good king henry, could be common orache, could be another member of Amaranthaceae. Picture taken last week in the currently-empty aqueduct that takes the Wey and Arun canal over the river Arun (by Lording’s Lock, near Billingshurst, West Sussex).

Why lump these two together? Because I have serious trouble telling them apart, and they are closely related anyway. The botanical distinction is to do with reproductive structures – the oraches have seperate male and female flowers, and the goosefoots don’t. This does help to tell them apart (the male flowers on the oraches are easily noticed), but only when the plants have started to mature. Apart from this they look very similar, grow in similar places (generally), and are of similar uses from a foraging point of view. And because none of them are poisonous, if you know you’ve got a goosefoot or an orache, then you know you can eat it.

There is one notable lookalike that foragers need to be aware of. Maple-leaved goosefoot can resemble the deadly-poisonous Datura (thorn-apple). Provided you remember this one, you aren’t likely to get into trouble foraging for members of this family.

There are lots of young goosefoots and oraches around at the moment. The most common of all, and probably the best to eat, is fat hen (Chenopodium album). This species is very variable indeed, which is part of the reason why the whole group is tricky. It is an early coloniser of disturbed ground which is a bit like spinach but considerably more tasty. You can use it for anything you’d use spinach for, and later in the year you can also collect the seeds.

So, back to yesterday. I was driving round a roundabout and I spotted something which, even from a car, was instantly recognisable as a goosefoot – or so I thought. But it was a beautiful red colour, and I was not familiar with any red goosefoots. I was aware, however, that there is a plant called “red goosefoot”, and I immediately assumed that this must be what I’d seen on the roundabout. So I parked my car and made my way through the traffic to the middle of the roundabout. The earth had recently been disturbed, and several species were busy colonising it. One of them was a goosefoot (fig-leaved goosefoot, which is very similar to fat hen, the only difference being the distinctly three-lobed lower leaves.) The other was a beautiful, deep red plant that I did not recognise. A closer inspection of the leaves confirmed without doubt that this was a member of the Amaranthaceae, and since I had no books with me I just picked a load of it and continued on my way to Cuckmere Haven (which, for those who’ve never heard of it, is just about the last unspoiled river estuary in south-east England, and well worth a visit). Only when I returned home and googled for pictures of red goosefoot did I realise that this had to be something else; red goosefoot is nothing like as red as this plant, and has much smaller leaves. 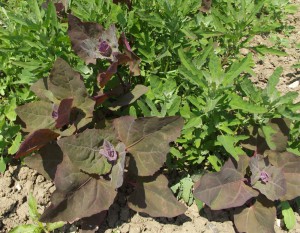 I checked my foraging books, and my wild flower books, and this plant wasn’t in any of them. At this point I was saved by the internet. As a hopeful stab in the dark, I typed “red orache” into google (it was red, after all, and if it wasn’t a goosefoot then maybe it was an orache…) I was rewarded with pictures of a plant looking just like mine, variously called “mountain spinach”, “french spinach” or “red orach” (Atriplex hortensis var rubra). Turns out the seed is sold in garden centres, and it is still a popular cultivated vegetable in France. It is grown in the UK both for the table and as an ornamental.

I have no idea what it is doing growing in the middle of a roundabout in Newhaven, but I’m glad I found it. I fried it with onion, expecting it to lose its colour when cooked. Not only did it retain much of its colour, but it also turned the onion red.  It’s also a first-class salad leaf and comes thoroughly recommended, although I suspect you’ll need some luck to find it growing wild in the UK.

One thought on “Mountain Spinach Surprise!”