Happy New Year to all my readers, and here’s hoping that 2018 can match last year for fungi. 2017 was a cracker. Details of this year’s events are now available (see links at the top of this page). These include a couple of public fungi foraging sessions at a piece of woodland (“Mill Wood”) recently purchased by an old friend of mine. Near Brede (East Sussex), it had been used as a woodland pig farm until being abandoned to nature four years ago, and I am looking forward to finding out what fungi grow there. The selection and age of trees suggest it is likely to be quite interesting. 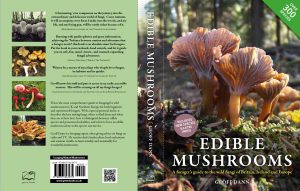 The main purpose of this blog post is, however, to provide an update about my book “Edible Mushrooms”. The first print run  is now almost totally sold out, and as a result you’ll find it is currently unavailable from many sources. A new version is en-route from the printers in India, and it should go on sale (as a paperback) at the end of this month (January). This new version has a new, brighter picture on the cover – the Dark Honey Fungus of the old version having been replaced with Winter Chanterelles. The most important change is the addition of a Latin index, which is likely to make the book considerably more useful for people who want to cross-check information with books written in languages other than English. Some of the contents have been slightly re-arranged to make better use of space, which has meant some additional information could be added, including three new species. Finally the font has been changed, since some readers expressed a dislike of the rather fancy ligatured font used in the original version. There will be an official launch of this new version as a “new edition” in June, when it will become available as a hardback for the first time.