At the risk of being accused of inverted snobbery…

What would you think if you read a recipe supposedly written in English, and it asked for 200 grams of oignon? What if you were in a British restaurant and saw “boeuf” of the menu? Answer: if you’ve got any sense, you’d know that the person who had written it was a pretentious twit. This is Britain, and the appropriate words to use are “onion” and “beef”. Writing “oignon” or “boeuf” is every bit as ludicrous as starting the ingredients/contents list of a food or toiletry product with “aqua”, as if anybody was actually dumb enough to know that this isn’t plain old water, or was convinced to buy something they wouldn’t otherwise have bought because “aqua” sounds cooler, or higher class.

This sort of pretentious twittery infests the food industry, and occasionally it also misleads people so they aren’t capable of understanding the recipe or menu item, and at this point it becomes an abuse of language. It also makes the already-difficult job of learning to identify wild mushrooms even harder. But hey, why demystify people when you’re trying to impress them?

I’ve spent many years berating people for calling penny buns by their French (“cep”) or Italian (“porcino”) names. What is wrong with “penny bun”? Do “cepes” taste nicer? Are “porcini” higher class? Fortunately this particular example doesn’t usually lead to people getting the species wrong, because there is only one species involved. The same does not apply to the names “chanterelle” and “girolle”.

The name “girolle” is only used by pretentious chefs, the menus and recipes they are responsible for, and by members of the public who have been misled by the aforementioned pretentious chefs into believing that the fungus with the latin name Cantherellus cibarius is legitimately referred to in English as a “girolle”. The same chefs then use the common name “chanterelle” to refer to another species – Craterellus tubaeformis (previously known as Cantherelllus tubaeformis). Confused? Blame the pretentious chefs.

In France, C. tubaeformis is known as a chanterelle, and C. cibarius is known as a girolle. Fine, if you are writing in French. If you’re English, and writing in English, then it is not fine, because the result is confusion like this by Galton Blackiston, on the BBC website:

Because this recipe uses both species concerned, it is possible to see what has gone wrong. “Chanterelle” is hotlinked on this page to http://www.bbc.co.uk/food/chanterelle_mushrooms , which states that “chanterelles are wild mushrooms with a bright orangey colour that grow particularly well in Scotland and in Scandinavia, where they are highly prized.” Nope, that’s not what Galton meant. He meant “dingy brown mushrooms that grow particularly well in pine woodland all over north-west Europe in the late autumn and early winter”. The bright orangey ones he’s called “girolles”, and just for good measure he’s thrown in some Italian as well, because “Penny Bun” wasn’t pretentious enough. This mistake is not the fault of the HTML coder at the BBC, who has simply as assumed that Mr Blackiston is writing in English rather than French, and doesn’t happen to be a chef or an expert on mousserons. Oops! I meant mushrooms.

This is not just pointless Académie-française-style language fascism – it does not matter if French words are adopted into the English language when no English equivalent already exists. It is a real problem, assuming you actually want people to be able to understand what you’re writing. In the above case the error is only visible because both species are being used at the same time. If the recipe just says “chanterelle”, then this mis-use of language means that nobody can know which of the two species anybody is talking about, unless they clarify by using the latin name too.

So, for the record: 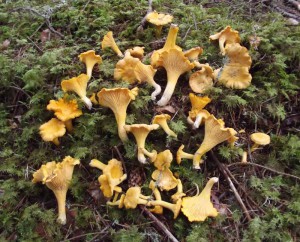 …are chanterelles. They are not “girolles”, unless you are French, or pretentious. 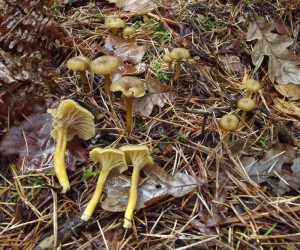 …are winter chanterelles (or trumpet chanterelles, or yellowlegs). They are not “chanterelles”, unless you are French, or pretentious.

Both species are fruiting in the UK right now. The chanterelles are heading towards their last flush of the season, and the winter chanterelles have just started to appear (I found some three days ago, considerably earlier than I usually do, and just in time for the masterclasses at the Brighton Food Festival).  Both are also delicious.  This is not about safety – it is about using language for what it is for (communicating, preferably clearly and accurately) instead of using it in the way marketing people use it.