Mushroom season 2019 has started with a slow ramp-up rather than a spectacular burst of activity. After last year’s weird weather, something resembling normality has returned. We’ve had enough rain over the summer to ensure that the summer-fruiting fungi have been appearing continually since June, though rarely in large quantities until now. 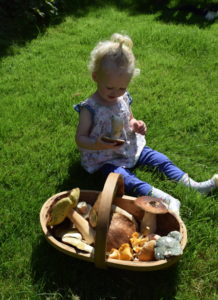 Penny Buns (Cep, Porcini, Boletus edulis) are having a particularly good year, although I am not finding anything like as many of the other large boletes. I’ve seen a handful of Dark Penny Buns (Boletus aereus) and Summer Boletes (B. reticulatus), but nothing like the torrent of these two species that were around this time last year. Quite a few Chanterelle (Cantharellus cibarius) patches are also fruiting prolifically, and I came across a mass-fruiting of Amethyst Chanterelles (C. amethysteus) on Saturday. Black Trumpets (Craterellus cornucopiodes) are just starting to come through in some places too, although it is too early to say whether it is going to be a bumper year for those. There’s also a decent selection of Brittlegills (Russula sp.) and Amanitas fruiting, including Deathcaps (Amanita phalloides).

Hopefully we aren’t going to have any record-breaking temperatures in September, and can look forward to a more typical mushroom season than we’ve been subjected to recently.