It has been a muted start to the mushroom season in deepest south-east England. The last couple of years have seen a big fruiting in August, but this year there has been very little around. The situation isn’t hopeless — there are mushrooms here and there — but most species are either fruiting unenthusiastically (few fruit bodies, not very large) or are entirely absent. There are very few Brittlegills, for example, and no Milkcaps. There are some Penny Buns (Ceps) in places, and Chicken of the Woods is doing well, but nothing worthy of me writing a blog post about. The situation is better in other parts of the country, presumably because they have had more rain. 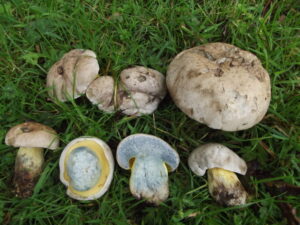 So perhaps it is time to talk about a species I usually ignore, because it isn’t edible. Rooting Boletes (Caloboletus radicans) are too bitter to be edible, and possibly mildly poisonous as well. They are easily recognised — large, pale-capped, bright yellow pores that readily bruise blue, flesh that turns blue, nearly always with oak, and typically in open areas rather than dense woodland. This species is currently by far the most abundant bolete in Kent and Sussex.

This abundance isn’t reflected in the information in most fungi guides. Phillips just says “occasional”, and Buczacki says “occasional to uncommon”. I listed it as “frequent in southern England” in my own book, but I’d now say that is an understatement. In Kent and Sussex it is common, bordering on very common. You certainly won’t have any trouble finding it right now.

Looking forwards, we need some serious rain. My guess as to why the situation is disappointing is that even though the ground looks damp on the surface, it is still dry underneath. Unfortunately the forecast is heading in the other direction.