Spring is just around the corner, and the early spring plants are ahead of their normal schedule due to the very mild second half of February. In my own immediate locality one of the best-known spring vegetables is currently super-abundant (as is often the case). Smooth Sowthistle (Sonchus oleraceus) has been highly regarded as an edible wild food since antiquity. The Latin “oleraceus” literally means “having the qualities of a pot-herb”. Viewers of the BBC’s new adaptation of Watership Down, screened in two parts at Christmas, may recall the numerous mentions of this plant as being reserved for the most high-ranking rabbits in the burrow, and an older common name is “Hare’s Thistle”, in reference to its supposed beneficial effects on hares and rabbits.

There are three common species of sowthistle in the UK, and while the other two (Perennial and Prickly Sowthistle (S. asper and arvensis) are also edible, they are more spiny. Smooth sowthistle is the best for eating, having more tender and slightly tastier leaves. There are plenty of things you might confuse it with, nearly all of them other members of the Daisy Family (Asteraceae), but none of them are dangerously poisonous so it is a relatively safe option for foragers. 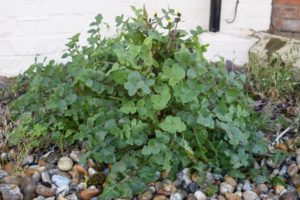 The biggest problem, at least in urban areas, is dog contamination. They tend to grow exactly at the level and in the sort of places where dogs like to go, which is rather off-putting. Fortunately, they are also so prolific that you can usually find somewhere less likely to be contaminated – the ones we had for dinner this evening (pictured right) were growing outside the front of my next-door neighbour’s house, in a raised area out of the reach of passing dogs.

What to do with them? The very young leaves go well as a salad leaf, slightly bitter but less so than either Rocket or its relative Raddichio. Older leaves are more bitter, but this bitterness is significantly reduced by boiling for a couple of minutes, after which they can be served like Spinach. The midrib of the leaves retains it crunch even after brief boiling, and they make an excellent component of a stir-fry. They are also nutritious, containing significant quantities of iron, calcium and vitamins A, B and C.

If you’re interested in learning more about foraging for spring plants, there are still some places free on our new courses at Brede in Sussex. All the details can be found here.