Calocybe Gambosa, or St George’s Mushrooms, are one of the few edible fungi that always appear in the spring.  The name comes from their uncanny habit of appearing on St George’s day (April 23rd).  They were one day late this year, although I have not seen a large quantity of pickable size until today.  This is normal – they start to appear around St George’s day (rather unusual for them to be early) and then continue to grow for several weeks, finally disappearing with the first really hot weather.

They are saprophytic, and grow in a wide variety of habitats (woodland and grassland, by paths, and also in gardens and cemeteries), often in rings.  They are very likely to be growing somewhere near you, right now. 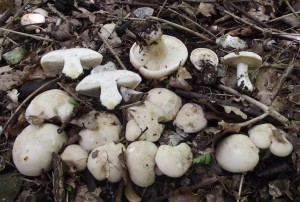 They are reasonably safe for beginners to pick.  If they grew in the autumn they wouldn’t be, because they are white-gilled mushrooms, and any mushroom which appears in summer/autumn and has gills that stay white should be treated with major caution by foragers because of the possibility of confusion with the deadly amanitas (in this case the destroying angel and the white form of the death cap).  Those deadly amanitas don’t appear in the spring, so St George’s mushrooms aren’t usually confused with them, and there’s nothing else dangerous that looks like these, appear in the spring, and smell like these.  The smell is a dead give-away – once you know the smell then there is nothing you could mix them up with, and even for somebody who has never found them before, it helps to know you are looking for something with a strong and distinctive odour.

Few wild mushrooms provoke as much disagreement over palatability as these.  They are the fungal equivalent of marmite; some people love them, others hate them.  There is also a wide range of opinion of how best the taste should be described (bonemeal, bread dough, melons…) Because of their strong taste, it is inadvisable to just use them as substitutes for normal mushrooms in recipes.  They are traditionally served with liver, but will work just as well served on their own, fried in butter, with just about anything.  What they don’t do is combine with other flavours as you’d expect normal mushrooms to do, so be experimental, but don’t assume that everything you try with them will work!