Well, the UK is now officially experiencing the longest period of prolonged hot, dry weather since 1976. The heatwave that year is etched onto my memory – I was just about to turn eight years old, and had never seen anything like it before. I remember my mother syphoning used bathwater out of the bathroom window with a hosepipe in order to keep the vegetables watered. But mostly I just remember the sun didn’t stop shining all summer long. In fact, the hottest and driest part of that year was precisely the period that’s just finished this time around (end of June and beginning of July), but it continued on into August, with some parts of the south seeing no rainfall at all for 45 days. Then came the ladybird plague. People who weren’t there don’t believe the stories, but it was truly like something out of the Old Testament. I remember walking along Brighton seafront, with ladybirds crunching under each step. The groynes were painted red with ladybirds. This plague was the result of conditions in the previous 18 months being perfect for the reproduction of the ladybirds’ favourite food: aphids. But the heatwave killed off the vegetation the aphids were eating, leaving the booming population of ladybirds with nothing to eat. This caused them to swarm in search of food, until they were trapped against the south and east coasts. Happy memories… 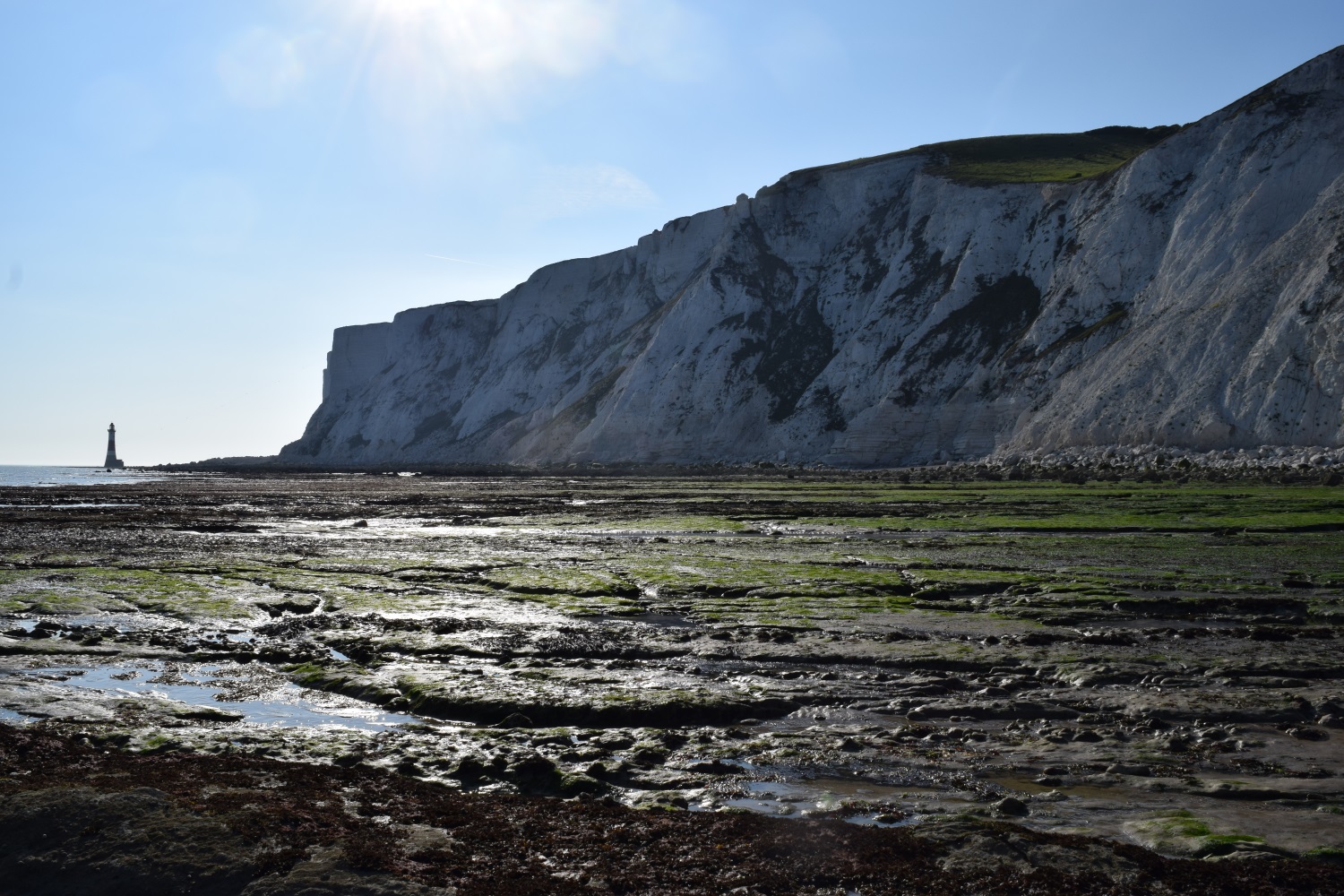 The sun beating down on the wave-cut sandstone platform below Beachy Head in Sussex. At least the edible seaweeds are thriving.

But what does this year’s ongoing drought mean for fungi, and foraging in general? Bad news, mainly. There’s very little in the way of plants worth foraging, since most of them have stopped growing. The best foraging to be had is coastal, since the seaweeds are in their prime. Although even this was looking touch-and-go until quite recently, at least on the south coast, because of the worst algal bloom in living memory. This algae had turned the water a foul browny-green, and had a negative impact on much of the seaweed growth. In the last few weeks this has begun to clear up though, and the water quality and seaweed are recovering.

In terms of fungi, there’s almost nothing fruiting at the moment. Fungal mycelia can lie dormant and survive extended periods of drought, but they cannot produce fruit bodies. This is because the fruit bodies are composed primarily of water, and the mycelium has no reason (or capability) of storing water. That mycelium can build up stores of the other things it needs to produce fruit bodies, but it requires at least some rainfall to penetrate the ground before it can fruit. There are very few exceptions to this, but a handful of northern European species are drought-tolerant specialists, and if you are going to find any mushrooms at all at the moment it will probably be one of these. One of the most spectacular, and rarest, is a relative of the Deathcap called the Solitary Amanita (Amanita echinocephala). Its common name derives from the fact that it usually fruits as singletons (presumably because it usually fruits in dry weather), and its Latin name refers to the pyramidal warts (or spikes) on its cap. As far as edibility goes, it falls into the category of probably not poisonous but please don’t pick it because it is far too rare. 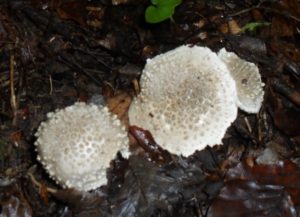 The only fungi I have actually seen growing in the last couple of weeks were bracket fungi related to Artist’s Fungus (which you can draw on) and Reishi/Lacquered Bracket (which is very important medicinally). These are Ganoderma resinaceum, yet to be given an English common name, and they are both fruiting from very large trees (one dead, one alive).

How does this hot weather bode for the autumn fungi season? Well, that depends on whether it keeps going, or whether the pattern breaks and we get deluged with rain. Hot weather during the summer is actually good for some fungi, especially the mycorrhizal species that live symbiotically with trees. The trees like the sunshine, and because they have such deep roots they can do well even when it doesn’t rain for a very long time. This means that when the autumn comes, they are loaded with plenty of carbohydrates which they can give to the fungi. Hot weather is also bad news for the slug population, which in turn is good news for any soft fungi that do eventually fruit. There’s also a backlog of things which haven’t been able to fruit, which may all fruit at the same time when it rains. So there’s three different reasons to be hopeful of a bumper crop of fungi, eventually. 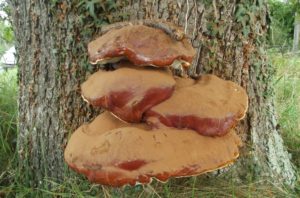 Of course, this only works if the rains come. If the dry weather continues into September and October, fungi season will be delayed. Very occasionally (last time it happened was 2003, if I recall correctly), a drought in the first half of the autumn is then followed by an early cold snap, and when this happens the fungi season can be wiped out entirely. More frequently we get what happened in 2011 (IIRC), when finally something like normal autumn weather arrived at the start of November, which led to a massive glut of all sorts of things, as the species that normally fruit in September and October went crazy at the same time as the species that were fruiting in their usual late-Autumn spot.

For me, the hot weather can’t end to soon. I’m one of those who can’t sleep when it is like this, and it worries me to see the countryside so thoroughly parched. If anyone knows a good rain dance, now is the time.