I went out today in search of cherry plums, and found none. But as is often the way with foraging, you go out looking for one thing and end up finding something else. This time it was an almost perfect roadkill deer. 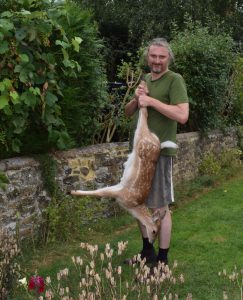 The small ones are more juicy…

Roadkill is a bit of a lottery. A large number of deer are involved in collisions on Britain’s roads every year, and I drive past more than my fair share in the heavily wooded countryside of Kent and Sussex (I am fortunate not to have actually hit any – they can do some serious damage to your car). Many of these carcasses are not in very good condition, especially at this time of year, when the temperature means that roadkill meat does not stay in good condition for very long unless it is found and dealt with soon after death. In freezing conditions in mid-winter it keeps for much longer. In this case, it was a young fawn and the carcass still had rigor mortis when I picked it up from the side of the A21, indicating that it was a fresh kill. The fact that it was so young was also beneficial – there might be less meat on a young fawn like this, but it is obviously much easier to get it into the back of the car, and it is easier to butcher the carcass. The meat is also very tender, unlike in some older animals. 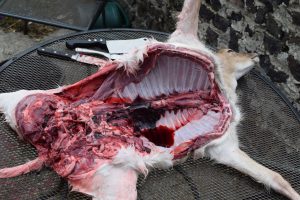 The next thing that determines how good a carcass is for meat is where on the carcass the damage is. In this case it was not obvious from looking at it – there was no visible damage. This is a good sign, apart from the small risk that the animal did not die from a road traffic accident – you do not want to be eating animals that died from disease. However, since this was next to a road, the chance of that was very slim, and it usually becomes very clear what happened as you butcher the carcass – the butchery process is therefore partly an autopsy.

The last thing you want to find is damaged intestines or stomach, because this can taint the whole carcass. Put bluntly, it makes the meat taste of shit, as well as introducing health hazards. In this case the guts were completely intact, but there was some damage to the liver. Venison liver is very rich (so rich that it it unsafe to eat it more than three or four times a year, or you risk poisoning from excessive amounts of vitamin A). Further damage became apparent to the rib cage – this fawn had suffered a sideways impact, damaging mainly its ribs and some of its internal organs. But on the whole there wasn’t much damage and nearly all of the best cuts of meat were in a usable state. 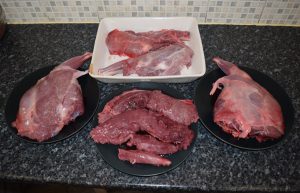 The bits I usually keep from a roadkill deer (in addition to the liver) are the legs, the saddle and the tenderloin. This was a rare case where all of these parts were usuable. On a larger deer, creative use of parts like the neck and flanks become more worthwhile.

The meat is now sitting in my kitchen (with the windows closed to stop the flies coming in), so the blood can drain out of the various cuts. Will be ready for freezing later this evening.