We have just got back from a week of Welsh sunshine on what is arguably the most spectacular coastline anywhere in the British Isles. It was a busman’s holiday for me, the main reason we were there being that I could search for seaweeds I can’t find in south-east England. Pembrokeshire is a seaweed forager’s dream: crystal clear water, large tidal ranges and a wide variety of different rocky habitats from sheltered to very exposed. And it is these most exposed areas which provide a home for species I don’t find at home. This post covers three of them. 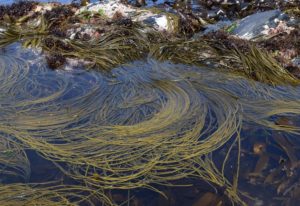 The first of these – Sea Spaghetti (Himanthalia elongata) – I do occasionally find washed up after stormy weather when walking my dog in Hastings, but I have no idea where it has come from, and it is not advisable to eat detached seaweeds, because you can’t tell how long they’ve been dead. The nearest place on the south coast I have ever found it growing is 150 miles west at Lulworth Cove in Dorset, and travelling anti-clockwise round the British coast from there it is rare or absent until you reach Yorkshire, only becoming common near the Scottish border. Sea Spaghetti is an almost hypnotically beautiful species of seaweed, because of the way its long fronds twist and turn with the movement of the water. I could watch it for hours, if it wasn’t for the fact that it is only fully visible when the tide is very low. In the kitchen it is usually used as a substitute for real spaghetti, either completely or 50/50. As such it provides a naturally gluten-free alternative to wheat spaghetti. Like most seaweeds it dries well, and in this case you should make sure it also dried straight, which makes for easier storage. 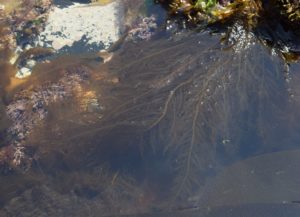 There are no poisonous seaweeds – at least not in the sense that we normally think of “poisonous”, but the second of my threesome is about as close to poisonous as a seaweed gets. It belongs to a genus (Desmarestia) that are sometimes called “Sea Sorrels”, which might mislead you into thinking they are good to eat. The land sorrels are excellent salad vegetables, with a tangy, lemon-like taste caused by the presence of oxalic acid. Desmarestia have another common name which might mislead you into thinking they are psychoactive: “Acid Weed”. Unfortunately, the acid in question is the sulphuric variety. Yes, you read that right, these seaweeds contain battery acid. Their internal pH is around 0.5, and if they break open in a container with other seaweeds, they will wreak havoc, destroying everything in the container, including themselves. I’ve never found and identified any of them before, but on one location near an old slate quarry, there was quite a lot of what I believe to be Desmarestia ligulata (which has various common names, such as “Flattened Acid Weed”). 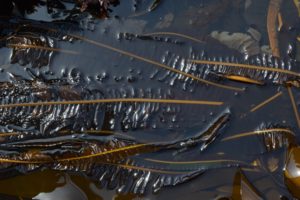 However, I didn’t travel to the other side of the country to find Sea Spaghetti or Acid Weed; I was there to find the only significant edible native British seaweed I did not have a book-quality photograph of (I am currently working on a book on edible plants and seaweeds). Its Asian relative Wakame (Undaria pinnatifida) is very important in Japanese cuisine. Alaria esculenta has a confusing collection of English common names, including Badderlocks, Dabberlocks and Winged Kelp, but I shall call it Atlantic Wakame. It is reasonably common on exposed rocky coasts from Cornwall, all the way around clockwise to the equally-wild north-east coast of Scotland, but absent on the south and east coasts of England. What makes these Wakame species different from other kelps, both biologically and in 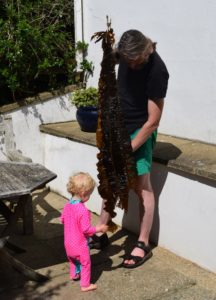 terms of their food use, is their midrib. The midrib is perfectly edible (it is sweet and crunchy and can be eaten raw), but it is the other parts of the blade that are use for salads in Japan. The midrib provides structural support for the blade, which means the “wings” (the rest of the blade) are considerably more tender than other types of kelp, requiring less cooking (or less chewing).

Atlantic Wakame is at its best from early spring until about now. We just had some in a salad for our lunch. Recipe is described below.

Bring a saucepan of water to the boil. Add the seaweed, bring back to the boil, then remove saucepan from the heat and let the seaweed soften for 20 minutes. Meanwhile, in a bowl, mix the rice vinegar, lime juice, soy sauce, honey, oils and and grated ginger. Whisk in vegetable oil and toasted sesame oil and season with salt. Drain the seaweed, rinse under cold water and pat dry. Remove the midribs and slice. Mix the seaweed well with the sliced cucumbers and scallions, then spoon the dressing over it and garnish with toasted sesame seeds. Serve immediately.