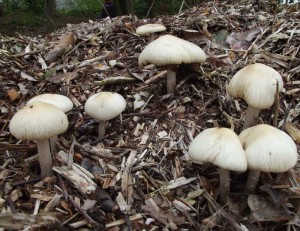 The vast majority of species of wild fungi fall into the category of “edibility unknown” and are destined to remain that way for the forseeable future. After all, who wants to be the first to try? And, in most cases, what would be the point?

We know about the really dangerous ones, for the obvious reason that if a fungus is deadly poisonous then, even if it is quite rare, enough unfortunate people will have eaten it over the years that its toxicity is brought to the attention of the medical profession. All of the species that we can be confident enough to recommend people for eating have been traditionally eaten somewhere in the world, and that means we can be reasonably sure that there are no long-term problems associated with their consumption, and that if a significant proportion of the population experiences some sort of allergic reaction then we’ll know about that too. They also tend to be reasonably common (at least somewhere) and not tricky to identify or easily confused with something deadly.

This still leaves a vast selection of species whose edibility is not known, and there are various reasons for this. Some of them taste unpleasant enough that nobody in their right mind would even want to eat them (although this didn’t stop the Chinese, who are recorded to have traditionally eaten all sorts of things that don’t agree with a western palate). Others are too tough to digest, or too small or flimsy to bother with. A very large number of them are either sufficiently uncommon or hard to identify that the data on edibility simply doesn’t exist, even if people have eaten them in the past, and there is no point in experimenting now to determine the edibility of uncommon or hard-to-identify fungi. Still more are out of bounds because they are related to species known to be highly toxic, making them too risky to experiment with. 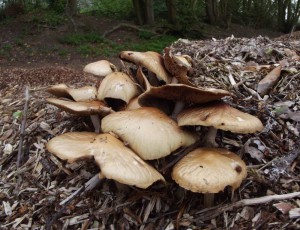 Agrocybe rivulosa, April 2014, near Hastings, Sussex. These ones are a bit past their best for eating.

Agrocybe rivulosa is just about the only the species I can think of that falls into none of these categories. It was first scientifically described only a decade ago, having turned up out of the blue in Rotterdam, Holland. Since then it has spread rapidly, and can now be found all over north-west Europe growing prolifically on its chosen habitat of of woodchips. I can find no information about its edibility, presumably because nobody has tried eating it. However, it has a close relative that is edible and very tasty. A. cylindracea – the Poplar Fieldcap – is a choice wild mushroom that has long been cultivated in Asia. Not only does it belong to the same genus as A. rivulosa, but also shares a similar habitat. Most members of the genus are terrestrial, but A. cylindracea, like A. rivulosa, is a wood-muncher (although it prefers logs and roots).

Not all Agrocybes are considered edible, but none of them are dangerously poisonous either. The same cannot be said of their more distant relatives. They belong to a large and diverse family known as the Stophariaceae, which includes the very common, very bitter and significantly toxic Sulphur Tuft (Hypholoma fasciculare), as well as the highly-hallucinogenic Psilocybe species – the “magic mushrooms”. However, even these aren’t in the same league of toxicity as the Amanita, Galerina, Cortinarius and Inocybe species that can kill you in one serving. So, all things considered, it seems unlikely that A. rivulosa is dangerous, and there is a decent probability of it being delicious, as well as common, easy to identify and big enough to be worth collecting. It also has the major advantage of appearing from spring onwards, so it is around when not many other wild fungi can be found. Finally, it is very likely that this species could easily be cultivated.

This was all too much for me to resist and when I found some a couple of days ago I decided the time had come to take the plunge. I had a couple of large caps yesterday, and having suffered no ill-effects I ate the rest of them with my breakfast this morning. And I am happy to report that they are indeed delicious – very similar to the Poplar Fieldcap. 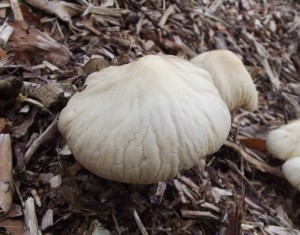 Agrocybe rivulosa, showing the river-like striations on the cap from which it takes its name

No doubt I will be accused by some of irresponsibility for telling people they are edible. Have I been eating them for years? Nope. Have I tested them on a hundred people and made sure nobody had an allergic reaction? Nope. I have, however, established that they are tasty enough to be worth eating, and that, at least to me, they do not contain any immediately-acting toxins. It’s always possible they are one of the unusual cases where many years of repeated consumption is required before the toxicity is revealed, but these is no reason to believe this is likely. At the very least, I hope I have started the ball rolling. I’d be very interested to hear about other people who have tried eating this mushroom.

Agrocybe rivulosa is a fairly typical-looking member of its genus. It is about the size of a standard “shop mushroom”, although slightly less substantial. It has a cream cap, light brown gills and a ring. The name “rivulosa” refers to the river-like striations on the cap.