There are quite a few poisonous/edible lookalike pairs of species of fungi.

The most famous of these pairs is probably the death cap (Amanita phalloides) and the horse mushrooom (Agaricus arvensis), but there really isn’t any excuse for getting these two confused.  Yes, they look rather similar, and they can grow in similar places, but a death cap emerges from a sac (a “volva”) and a horse mushroom does not.  In other words, provided you do a bit of basic research, and keep your eye on the ball when it matters, then there is no reason to worry too much about getting them mixed up.

It is considerably easier to confuse fool’s funnel (Clitocybe rivulosa) with the miller (Clitopilus prunulus), and although the C. rivulosa is less dangerous than a death cap, it is still dangerous enough to regard the very-tasty miller as a species which should be left alone until you have got a good idea what you are doing.  You certainly shouldn’t go near it until you’re absolutely certain you know how to identify the poisonous Clitocybes.   But again…there’s no reason to regard the miller as too dangerous to eat.

The same cannot be said of sheathed woodtuft (Kuehneromyces mutabilis). 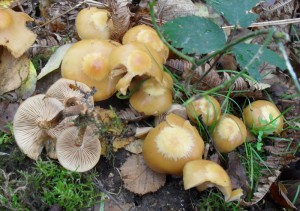 This species, I have recently discovered, is very tasty indeed.  I now regard it amongst the very best of the edible wild fungi – one of the few that are worthy of being included in a recipe specifically as the main source of flavouring for the dish.  It is also common – not very common, but common enough that I expect to find it every year, and with the added advantage of regularly appearing outside of the main mushroom season, as well as fruiting in abundance more often than not.

So what’s the problem?  The problem is that this one has a lookalike that is not only deadly (containing the same toxins as the deadly amanitas), but which is extremely difficult to reliably distinguish from sheathed woodtuft.   It goes by the name of “funeral bell” (Galerina marginata) and it is a species for which I had been searching, without success, for over a decade.  Maybe I was missing it, or perhaps I was mis-identifying it as a Psathyrella, or a member of some other group that is of little interest to foragers.  I suspect, though, that I just wasn’t lucky (or maybe unlucky) enough to find it.

I have always had a rule, you see, about edible/poisonous pairs of fungi: I don’t eat the edible one until I’ve found and identified the poisonous lookalike.  Last autumn (2012) I broke this rule.  I ran out of patience, having come across what I was convinced was sheathed woodtuft for the umpteenth time, and knowing they were supposed to be good eaters.  So I decided to employ a new tactic, specially for this case.  First I nibbled just a quarter of a cap (they are small).  Just enough to get a taste, and to see if there would be an adverse reaction.  Having survived this first taste (and discovering it was indeed very tasty), I ate one whole cap the next day.  Again I waited, and again there was no adverse reaction.  The following day, with the mushrooms still sitting in my fridge, I ate three of them.  Again I waited, and again I woke up the next day having sufffered no ill-effects.  By now I was confident of my identification and I finished off the rest of them, and they did not disappoint.

Then, on December 17th, while out on a walk across the South Downs organised by a friend of mine (not specifically a foraging walk, and not a route I had chosen) I was surprised and delighted to find, and identify in the field, the poisonous lookalike.  My walking companions couldn’t quite understand why I was so excited about finding a mushroom that could not be eaten, but for me it was like any sort of collector who has come across something very special they have been seeking for many years.  There it was, innocently sprouting from a log in a small, unmanaged tract of ancient woodland, nestled in the hills between Brighton and Lewes.  I’d completed the pair, and I now feel considerably more confident for the future. 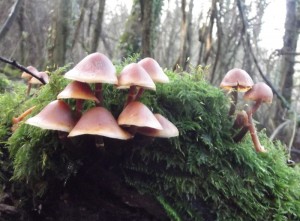 I still know nobody else who has eaten sheathed woodtuft.  I have not given it to anyone else to eat (customers or friends), and I know of nobody in the foraging or mycological communities who’ve been brave (or silly) enough to take what looks like a pointless risk with their lives.

So why are they so hard to tell apart?  They look very similar, and they grow in similar habitats (although sheathed woodtuft prefers deciduous stumps and funeral bell prefers conifers). They have a similar growth habit (at least sometimes they do, and that is enough.)  Sheathed woodtuft tends to occur in greater numbers, and in much denser tufts, whereas funeral bell troops (it is distributed more sparsely over the log/stump.)  The stems are also slightly different (funeral bell has a silky stem, sheated woodtuft is more “hairy”) – at least usually they are.  And they also dry out differently after being made wet (sheathed woodtuft dries from the middle outwards, funeral bell dries from the edge inwards).  The problem is that none of these distinguishing features is completely reliable, and when you’ve only ever seen the deadly lookalike once (or no times at all) then it is almost impossible to be 100% confident of your identification.  Plus there’s always the nightmare possibility of both species sharing a stump.

So I’m afraid I still can’t recommend anybody go out foraging for sheathed woodtuft, and for now I still regard it as too dangerous for me to send customers home with, or give to my friends and family to eat.  It is one thing taking a possible risk with my own life, but quite another to take risks with the lives of others.

Perhaps I’ll feel differently next time I come across what I now consider to be a delicacy.  More likely, at least until I’ve eaten them a few times, or come across funeral bell a few more times, I shall just use the danger-factor as an excuse to scoff the lot myself!