For me, the solstice is more important than Christmas. For a forager, or anybody else who spends a lot of time outdoors observing the natural rhythms of life, the shortest day is the most meaningful mark of the ending of one year and beginning of the next.

Every year is different, but some are more different than others. I can only hope 2019 is something closer to normal than 2018 has been. First we had “the beast from the east”, then the hottest, driest summer since 1976, and finally the weirdest, longest and least predictable autumn for fungi that I can remember.

My last post was premature; the end of October wasn’t the end of the mushroom season. After the rains just didn’t come in sufficient quantity, I had started to give up on any sort of major recovery, and stopped taking bookings for mushroom foraging in November. Since then the downpour has been relatively relentless, and the result was a very late fruiting of all sorts of species, including some that had already fruited three times earlier in the autumn, and others I’ve never previously seen in December at all, let alone new ones coming through in the middle of the month (including Fly Agaric, which has had the most incredible year). 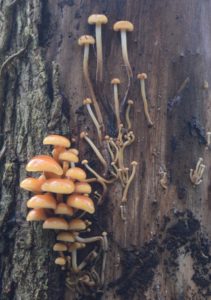 Normal service has finally been restored. It’s now muddy again where it is supposed to be muddy, and all springs in my immediate locality are back in full flow (some of them had been dry since August). And today, even though there hasn’t been a frost yet, I spotted the first of the winter specialists: Velvet Shanks growing in a ghyll in my local park. In this case they were fruiting partly beneath some dead bark, which showed, much more than normal, how they are in fact the same species as the cultivated Japanese enokitake.

Our Christmas tree isn’t up yet. Christmas trees are one of the traditions taken from yule, rather than having anything to do with Christianity. We’ve decided to go easy on Christmas anyway, it being our daughter Dorothy’s first and us being somewhat allergic to the whole commercialised consumerist merry-go-round it has become. So the tree will go up tomorrow, on the solstice itself (yule). It is currently in a pot in our back garden (we decided to try to keep the same tree each year, so it grows with Dorothy), and when I inspected it this morning I noticed a load of 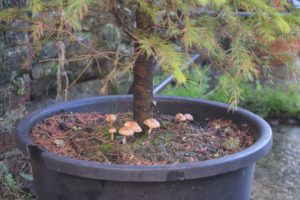 mushrooms growing in the pot. They were exactly the sort of “little brown jobs” I wouldn’t usually bother putting much effort into identifying, since there’s so many that look a bit like that and almost none of them are edible, but I also didn’t want to kill them unnecessarily but didn’t particularly want anything poisonous coming into our living room. Turns out they are Snakeskin Brownies (Hypholoma marginatum), closely related to the very common and poisonous Sulphur Tuft (H. fasciculare), as well as couple of good edible species. This species is a saprophyte, usually found in coniferous woodland growing on needle litter. They are of unknown edibility, but if the rest of the family is anything to go by then they aren’t likely to be dangerous, and if they are poisonous at all then they are probably bitter.