Foraging in urban and suburban areas can be even more productive than the countryside. This may seem surprising, given that much of urban and suburban areas are covered with tarmac and concrete, but this downside is offset by two factors. Firstly there is a significantly greater variety of habitats available, especially in suburban areas. A meadow is just grassland, woodlands are more diverse unless they are forestry monocultures, but towns and cities provide many different micro-habitats. Secondly there is the fact that in urban and suburban areas there is a huge variety of introduced plants, both native and non-native. You might argue that this doesn’t really count as “foraging”, but it is certainly food for free (although see below for notes on legality). There are also hazards to be aware of, some of which are common to all types of foraging (you need to be certain of the identification, because poisonous species abound), and some of which are more specific to urban/suburban areas. The most obvious of these is pollution, especially of the canine variety.

To give some idea of what can be found in a relatively small area, here is what turned up yesterday morning on a 15 minute wander that took me no more than 150 metres from our house. This is not a comprehensive list – just a selection of the best stuff.

Our garden backs on to a backstreet, and the first edible wild plant was growing at the base of the outside of the back wall of our shed (which is at the far end of our garden). This is unfortunately typical of the sort of location you might want to think twice about collecting food from in areas where dogs are walked (and yes that is a fag butt), but you can always wash it! The plant is Lamb’s Lettuce, also known as “Corn Salad” – something you can find on sale in many supermarkets, as a salad leaf. 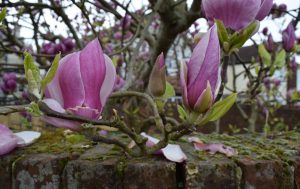 On the other side of the road is another wall, this one the boundary of a pub garden, and at the end of that garden is gorgeous pink Magnolia tree. Magnolia petals are edible, either raw as a somewhat unusual salad ingredient, or pickled. Taking parts of cultivated plants from within the boundary of private land is theft (if they are growing as “weeds” then it is not theft unless you intend to sell them), but you can take anything that is hanging over the boundary and therefore on public land. Magnolias are very pretty, but they are also super-abundant for the brief period they are flowering, so taking a few petals is not so bad. 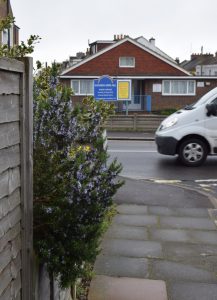 From here I walked about 15 metres to the front of the pub and took a left, and immediately encountered a foragable herb: Rosemary, again hanging over the boundary and clearly on public land so perfectly legitimate quarry for a forager. In the background, across the main road, you can see the local “Gospel Hall”, which boasts a car park that almost nobody ever uses (the gate is permanently padlocked). Foraging from the ground in car parks is generally a bad idea, but a car park that is rarely used is likely to be reasonably free of pollution, including the canine variety. 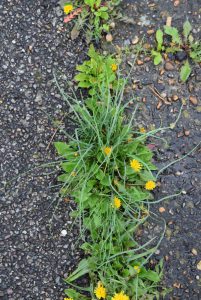 And growing from a crack in concrete in this particular car park is another herb: Chives. Very easily mistaken for grass – it pays to pay attention when foraging. 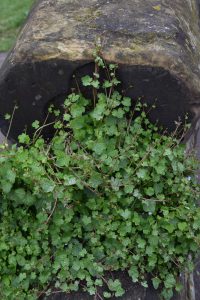 From the gospel hall I turned right and just another 20 metres is another ecclesiastical building, this time the Victorian church of St Luke. Growing on its front wall is an edible plant that can be found on walls all over the country. Ivy-leaved Toadflax is slightly bitter, and can be used sparingly in salads, but is probably most valued decoratively. Next to the church is another pub, this one closed since the last owners shut up shop at Christmas. With nobody maintaining the plant pots, nature has taken over. Yes, there are some cigarette butts in there, but that doesn’t render the plants any less foragable. 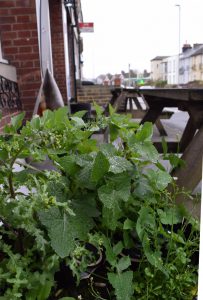 Of the three in this pot, two are excellent edible species, and high enough off the ground to be out of the range of all but the largest dogs. From left to right, Groundsel is mildly poisonous, Smooth Sow-thistle is a good salad leaf – slightly bitter but perfectly edible – and Hairy Bittercress is one of the very best (it is neither particularly hairy, nor bitter, and can be found growing in an unattended pot or bed near you). 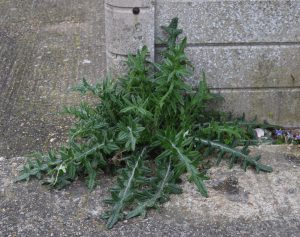 I then turned right again and headed back towards my back door, via a different set of side-streets. At the base of a garage wall was a thistle. These can be difficult to identify when they aren’t flowering, but they’re all edible. This one is Spear Thistle and it is armed with some pretty fearsome spines, but they are easily dealt with. 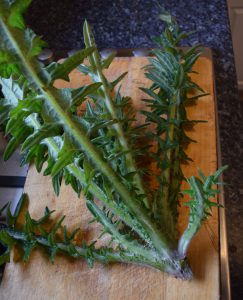 Spear Thistle, ready to be tackled.

You need to carefully cut the spines of the base of each leaf, so you can hold it without getting spiked. Then you run a sharp knife down the sides, from the base towards the tip, and the spines will come off along with the leaf blades. You can then use the knife to peel off the skin (and the “wool”), leaving the crunchy centres of the stem and the main shafts of the leaves. This species is slightly more bitter than some of its relatives, and it benefits from being soaked in water for a couple of hours to leach out the bitter compunds (although it is perfectly edible without this preparation). 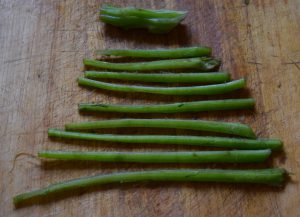 Spear Thistle, ready to be steamed. The fat section at the top is the developing main stem, the rest are the middle of the leaves.

It should then be steamed for a few minutes and served with salted butter. A few metres away from the thistle was a thick stand of lush Ground Elder – a plant brought to the UK by the Romans both as a food source and a treatment for gout. 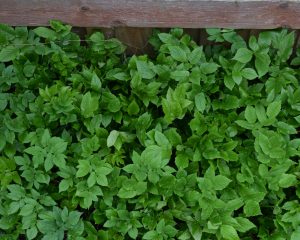 Gardeners may hate it for the difficulties involved in getting rid of it, but foragers just see it as a free, wild substitute for spinach.

The next find was the result of a tip-off. A lady had spotted me photographing the Magnolia, and when I told her I was interested in it as food rather than for its beauty she said that there was Wild Garlic growing in the alleyway that runs along the back of her own garden,which was very close. Since this alley is a dead end, I had never been down there before yesterday. It turned out she was wrong – or at least most people aren’t referring to the plant she was talking about as “Wild Garlic”. It is another Allium, usually known as Three- 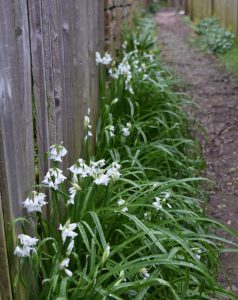 Cornered Leek, or Three-Cornered Garlic. Another one of the very best wild edible spring plants, but there are many better places locally (dog-wise) to pick it than this! 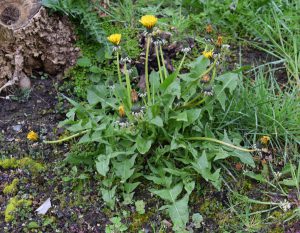 Having done a mini-circuit from my back door, I then tried from the front. The gardens are well above ground level here, and a few of them are unmanaged. Plenty of scope for foraging, and nobody is going to complain about somebody foraging Dandelion leaves. This plant is sometimes overlooked as a foragable item, perhaps because it is so common, but is has long been a popular wild food in France, where the young leaves are eaten in salads.

It wasn’t Dandelions I was really after though – my destination was an unadopted road a little further away. Here I was looking for another foraged Spring treat, but an increasingly hazardous one. The plant in question is Japanese Knotweed, the young stems of which are a less sweet but nevertheless perfect substitute for Rhubarb. Unfortunately (for a forager), at least in some areas, people are getting rather efficient at treating this seriously damaging invasive species with weedkiller – industrial-strength weedkiller of the sort you most definitely don’t want to be consuming. It is very difficult to be certain the Knotweed you’ve found has not been treated very recently, but there are some tell-tale signs that show quite quickly. Obviously avoid any plant that is wilting and looks like it might be dying, but also look carefully for two lines running lengthwise up the leaves. The weedkiller is often applied in this pattern. I am not 100% certain these have been weed-killered, but there does appear to be some lines and they will not be on my menu. I have plenty of rhubarb in my garden anyway… 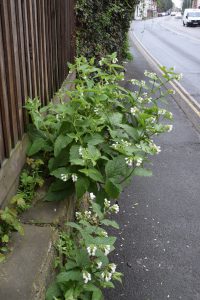 So I made my way back home empty-handed on the Knotweed front, but there were still a couple more edibles to be found. The first was Comfrey, growing out of a wall. This species has been used by humans for a long time, both as food and medicine, but has recently come under the spotlight as potentially dangerous due to its content of liver-damaging pyrrolizidine alkaloids. It is beyond the scope of this post to go into the details of what is a rather complicated debate surrounding the safety of Comfrey, but in summary, provided the species really is Common Comfrey (which has white flowers, not pink or purple), and you are eating the leaves rather than the roots, and you aren’t pregnant, the dangers are so minimal as to be irrelevant. 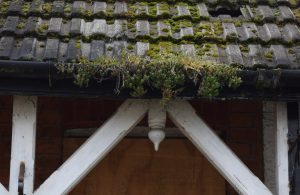 The last edible plant I found was growing from the gutter of the only derelict property in my neighbourhood. Derelict properties can be rich picking for foragers, but this particular plant can be found growing in gutters all over the place, as well as easier places to get to. White Stonecrop is a slightly hot succulent that can contribute a crunchy component to a foraged salad.

Free food really is growing all around us. You just have to know what you are looking for, and pay attention.