The start of June is not usually notable for being a good time to go foraging for mushrooms, but when the conditions are favourable then it’s not bad.  And they are currently favourable!

There are still spring mushrooms to be found – the St George’s mushrooms which took such a long time to get properly going this year are making up for it by still going strong into June; I found a new flush of these a couple of days ago, up on the Downs near Brighton. 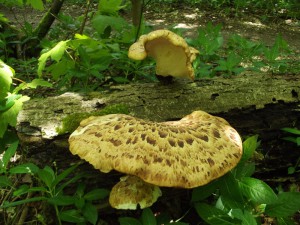 Another mushroom which is often found at this time of year and which is doing particularly well in 2013 is dryads saddle.  These are a great one for a beginner to go looking for, because of their combination of being quite common and almost impossible to mis-identify.  They are a bit hit-and-miss in terms of edibility at the moment though – I’m finding quite a lot which is too tough to eat even though it is still rather small.  I had previously assumed that the larger they get (and they can eventually get truly enormous), the tougher they would be, but this year it has become apparent to me that things aren’t quite that simple.  I’m finding some small ones which are too tough to eat, and slightly larger ones which are still edible.  The rule with these is that if you can pass your knife easily through the flesh, then they are edible.  If you struggle to slice them, then don’t bother, because it will be like trying to eat leather.

The other species I’ve found in the last few days can both appear any time from about now, right through until the end of the main mushroom season in November.  They just turn up when they feel like the conditions are right.  Both come with warnings attached.  The first is the fairy ring mushroom (Marasmius oreades).  This is an undeniable delicacy, but is also one of the species which regularly gets mixes up with something poisonous, sometimes with fatal results.  It is so named because it grows in rings (in grass, always).  Unfortunately it is not the only species that grows in rings in grass, and there is another similarly-common mushroom, about the same size and not much different in colour, which can kill you.  It’s called an ivory funnel or fool’s funnel (Clitocybe rivulosa), and I can’t recommend anybody go picking fairy ring mushrooms until they are absolutely certain they can tell the difference between these two species.  Even more unfortunately, this is itself rather difficult until you’ve found both species more than once.  It took me several years before I was confident enough to collect them. 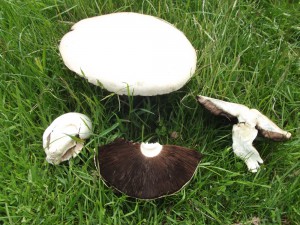 The other May-November species I found this morning, and I don’t recall ever seeing it quite this early before.  It’s the first Agaricus (relatives of the shop and field mushrooms) I have seen this year, and it regularly turns up about mid-summer but not usually right at the start of June.  Field mushrooms (Agaricus campestris) can appear as early as April, but these are far too big to be mistaken for those.  This is A. arvensis – the horse mushroom.  It can be distinguished from other agaricuses by the “cogwheel” ring, slight smell of almonds and large size.  Care must be taken not to confuse it with the poisonous yellow stainer (A. xanthodermus), which smells of phenol (like TCP) and bruises bright yellow (horse mushrooms also bruise a *little* yellow, but not bright yellow).  I found these growing in a sheep field on the Downs near Eastbourne.

2013 has turned out to be a pretty good year for mushrooms so far.  I can’t compete with the bountiful supply of morels and giant puffballs being reported by one internet poster from Yorkshire, but given we are still only at the start of the summer, it’s not looking bad at all.