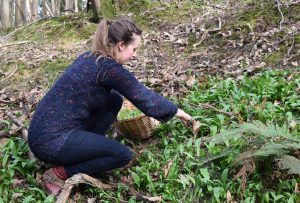 Spring is most certainly in the air. The last bout of cold weather down here on the south coast already seems a while ago, and our pond is bubbling like a cauldron with spawning common frogs and the most advanced Alexanders plants are about to burst into flower. And in those woods where Ramsons (Wild Garlic) abounds, the most advanced plants now have leaves big enough to be worth collecting. I am going to refer to this plant – Allium ursinum – as “Ramsons” for the rest of this post, even though it is widely refered to as “Wild Garlic”. This is because there are several other wild Allium species that are refered to as “Garlic” of one sort or another (several of which are also becoming available at this point). It is easy to recognise, because there is nothing else around at the moment with this combination of broad blades and strong garlicky aroma. You do have to take a bit of care 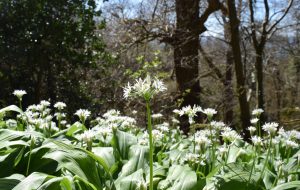 though – in the woods where we were foraging today, which are in a deep valley, the Ramsons dominate the lower levels while Bluebells dominate the higher slopes. There is a small band in the middle where both species grow together, and very small Ramsons leaves can look like very small Bluebells leaves. Also watch out for Lily of the Valley, which is the poisonous plant most easily mistaken for Ramsons. Again, just make sure what you are eating smells of garlic!

As for what to do with them – they go well just as wilted greens, or in a pesto, but today we had the classic Ramsons dish: Ramsons and Egg Salad. This is very simple to make, and delicious. 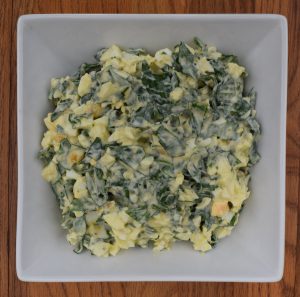 The amounts of these ingredients is entirely down to taste – just make it up as you fancy (although a rough guide is about the same volume of Ramsons and Eggs, and a lot more mayonaisse than mustard). Wash the Ramsons and remove most of remaining water with a tea towel, then spread out and leave to dry. Then hard boil the eggs (ten minutes), peel, roughly chop and put in the fridge to cool. When the Ramsons are dry and the eggs are cool, chop the Ramsons put in a bowl with the eggs and the rest of the ingredients and stir well. Serve with fresh crusty bread, and serrano or parma ham.