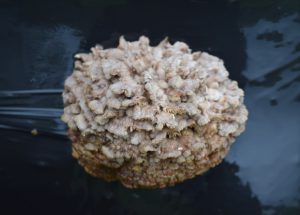 One might reasonably guess from the way it emerges from beneath the black plastic wrapping of a hay bale, like a slow-motion version of one of Ridley Scott’s aliens, that one is dealing with something a little unusual. Splitgill (Schizophyllum commune) certainly isn’t your average edible wild fungus (and in fact if you refer to the majority of European sources of information about this species, you’d also be forgiven for concluding that it isn’t edible at all, but you’d be wrong.)

So what’s so unusual about it? 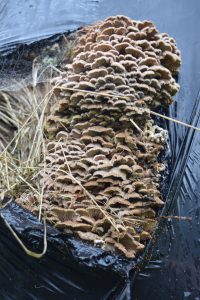 Firstly, it has over 28,000 sexes. If you want the grubby technical details of exactly what this means then see this article, but a simplified version would be to say instead of having either an XX (female) or XY (male) chromosomal pair that determines human sexes, Splitgill has over 300 genetic variations for the the first X and over 90 for the second X/Y. And any individual can mate with any other individual that doesn’t share one of those variations. The purpose of this apparently-bizarre scheme is to make sure that an particular individual can’t mate with its closest relatives – something that would normally happen quite a lot of the time, given the amount of spores produced by the fruit bodies of any one mycelium.

Secondly, it is one of the very few fungi (or species of any branch of life) which has a truly global distribution – or as near as makes no difference. It occurs everywhere there is a suitable substrate for it to grow on (wood, where humans don’t provide its favourite “artificial” habitat), which is everywhere from the tropics to the Arctic. 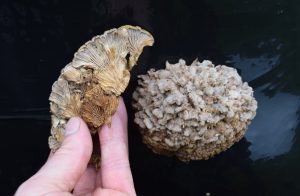 Thirdly, it is just about the only fungus that is both eaten by humans and also causes diseases in humans. It is wise not to sniff too many of the spores in, or risk getting one of a various infections, some much rarer and nastier than others. They include “chronic or allergic sinusitis, pulmonary disease, ulcerative lesions of the palate, atypical meningitis, cerebral abscess, and possible onychomycosis” (see https://www.hindawi.com/journals/criid/2011/821259/). 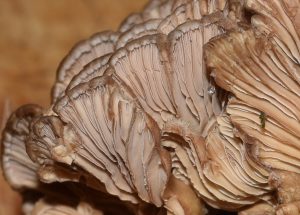 Closeup of the “gills”, clearly showing the “splits” after which the fungus is named

Fourthly, it has unusual gills, from which both its Latin and common names are derived. They are literally split. Well, technically it doesn’t have gills at all, but “undulations” or “flappy wrinkles” on the undersurface, which are distinctly split, although this only becomes visible as the fruit body dries out. This is some sort of protective mechanism, which helps the fungus survive varying amounts of heat and humidity in the diverse climatic conditions where it exists.

Fifthly, while it is actually quite rare in its “natural” habitat of woodland, it is locally very abundant in a completely different habitat: plastic-wrapped bales of hay, especially ones that have been left in a field for quite a long time. The “artificial” habitat doesn’t seem to resemble the natural one much, but once it becomes established it quite clearly likes its human-provided home.

Sixthly, it will eat plastic waste and turn it into human food, in a device called a “fungi mutarium” (see https://www.sciencealert.com/this-device-turns-plastic-waste-into-safe-edible-mushrooms). 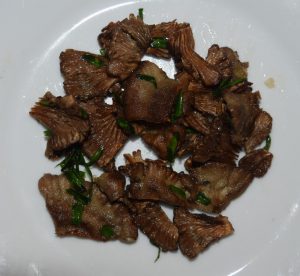 Splitgill fried in 50/50 butter and olive oil, with chives and flaked sea salt

And finally, as mentioned at the start, its reputation as an edible species varies wildly from one part of the world to another. This species is a popular edible in several tropical regions, notably India and Mexico, where it is both collected from the wild and widely cultivated. The rubbery texture of these fungi protect them from decay in the heat and humidity of those places. The same rubbery texture leads people from other parts of the world to assume they aren’t edible. However, European Splitgills are just as edible as their tropical counterparts – it’s just a matter of taste. Personally I rather like them. I briefly fry them in butter, with a generous helping of salt, and the result is not unlike crispy bits of bacon. Maybe a little more rubbery than meaty, and more umami, but if you try it you might be pleasantly surprised. I’d rank it as good, not just merely “edible.” A bit fiddly to prepare (you need to trim each “shelf” to get rid of the toughest, woody bit, nearest to centre, but certainly worth bothering with.

Identification is easy because the “gills” are so distinctive, and so is the habitat you are most likely to find them bursting out of (old hay bales wrapped in black plastic). Typically you will find them in summer and autumn, but those shown here were picked yesterday (April 27th). They are easily spotted if you do happen to cross paths with them, because the fruit bodies appear on a black background, so you can see them at a range of a couple of hundred metres.