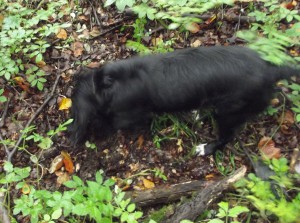 Ella the Truffle Spaniel homes in on a Summer Truffle…or is it a dead mouse?

Yesterday I found my first ever truffle! Well…strictly speaking, it wasn’t me who found it but a small black spaniel called “Ella”, but I was at least there when it was found.

I’d like to thank Sussex-based professional truffle hunter Melissa Waddingham, who kindly agreed to take me truffling in order to get some pictures for my forthcoming book, and so I could learn a bit about this highly specialised type of fungi foraging. The location must, of course, remain a top secret…although it was a patch of woodland I have visited regularly over the last twenty years, aware that there might be some truffles hidden away but with no means of finding them. You do need a dog, after all! 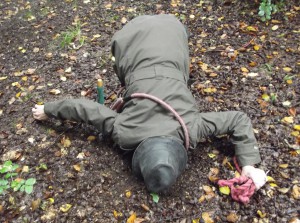 The first myth to be busted was that using a dog instead of a pig to find truffles means you don’t run the risk of the animal eating the fungus before you can grab it. Pigs famously love eating truffles, and aren’t exactly the easiest creatures to train, and one might assume that dogs are less likely to eat a fungus, especially one that smells of male pig pheromones. One would assume wrongly. Melissa has two truffle hounds, the elder of which (a labrador called Zebedee) is more than a little partial to truffles, to the extent that Melissa has to watch him like a hawk to make sure he doesn’t scoff the bounty within seconds of finding it. In the end Zeb found only a false alarm, at which point a second myth got busted. I had assumed that it would take the sensitive nose of our canine friends to smell a truffle, but no – Melissa hauled Zeb away from the 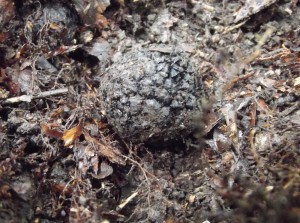 Tuber aestivum – the Black or Summer Truffle, in-situ beneath a beech tree

target spot and put her own nose to the hole, which must have once contained a truffle, because she could smell it. Even I could smell it – and my sense of smell isn’t great and the truffle itself wasn’t even still there!

A few minutes later it was Ella who actually managed to find what we were looking for. Just a centimetre or two below the surface, and looking superficially very similar to the blackened beech nut husks that littered the forest floor, was a Summer (or Black) Truffle – Tuber aestivum. It is a long way from being the most prized of European truffles, but the most important of the British species. The smell was very powerful indeed. Hard to describe the quality, but the strength was such that even zipped up the pocket of a 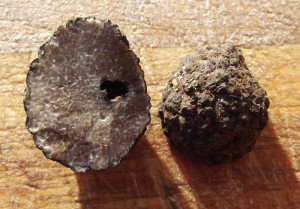 hoodie, with the hoodie zipped up in a bag, the smell was still strong enough to be detectable in the car on the way home.

So what to do with them? I followed Melissa’s recommendations and tried two dishes. The first involved mixing grated truffle with butter, and leaving it overnight before using the truffle-butter in a baked potato. The second was to grate it onto boiled egg. The flavour was delicate – nothing like as strong as I was expecting given the overwhelming smell from yesterday, but still

worth the bother and I’m very happy to have finally lost my truffle virginity!