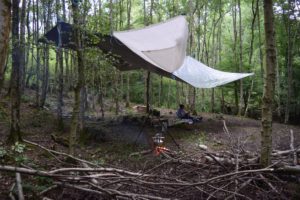 Basecamp at Mill Wood, brand new kettle on the fire

We’ve spent the last couple of days setting up the basecamp for some foraging events in a new location, the first time we’ve run anything like this. If today was anything to go by, these are going to be very interesting sessions. This secluded, and rather overgrown, private woodland in East Sussex has a rather strange history, having been turned from ancient woodland into a pig farm which apparently wasn’t a success, before being left for nature to reclaim it for a few years. It was purchased by an old friend of mine last autumn, and the first thing he told me about it was that it looked really good for fungi. And it seems he was right. 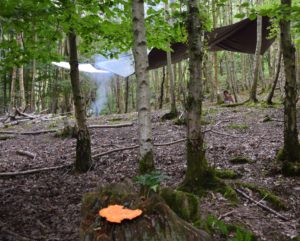 Basecamp at Mill Wood, Chicken of the Woods in the foreground

Yesterday, after 3 hours of messing around with different trees and ropes, we finally managed to get an 8x6m tarpaulin set up to our satisfaction, and today we set up a smaller tarp to protect the fire in wet weather, and had a first go at using our new cooking equipment. I also spent some time looking around the woodland for fungi, and ended up finding so much within 200 metres of the base camp that I had no need (or time) to foray further afield. The area I was looking in is mainly oak, birch and hornbeam, several edible species within a few metres of the tarp, including a Penny Bun (Boletus edulis) which one us unfortunately trod on, two Chicken of the Woods, several edible Brittlegills and some other edible boletes. A large flush of Weeping Widow (Lacrymaria lacrymabunda) wasn’t much further away. 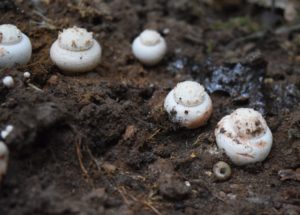 I also came across a real oddity. I was looking around in the immediate area of the base for logs suitable to be used as seating. There are a lot of logs round there that look like stumps, because they’ve been there for so long, so anything that looks like an attached stump was worth wobbling, to see if it was loose. One of these I turned over, and to my great surprise there were some fungi fruiting underneath it. Without my reading glasses to hand, it was not at all obvious what they were, especially as this is a very strange habitat for any fungi to be fruiting in. I guessed they might be some sort of earthstar, took a photo, and continued searching for seating.

Only when I got home and looked at the hi-res photos did it become clear what they are. These are very young Blushers (Amanita rubescens), just emerging from their universal veil. You can tell this by the pink discolouration, and the veil remnants on their emerging caps. But this is still a mystery, because it is not at all clear why they’d be fruiting under a log that looked like it had been there for several years. Fungi normally fruit where the mycelium detects lights (so if you have an infected damp beam in your loft, the fungi will grow down into your bedroom rather than up into the dark loft). So why would an Amanita mycelium try to fruit under a log? If the mycelium was only under the log, and not the surrounding area, how did it get there? 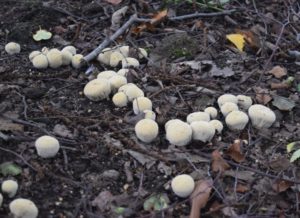 Puffballs, looking very much like Meadow Puffballs (Lycoperdon pratense), although this is an unusual habitat for that species.

Amanita at this stage have been confused for puffballs in the past, and in some cases this has led to serious poisonings when the Amanita in question was a Deathcap. It is easy to see how somebody might have made such a mistake. There were some puffballs around today too,  growing on a thin layer of soil that had accumulated on what looked like hardboard covering some sort of pit. These are Soft Puffball (Lycoperdon molle).

Anyway, I am now very much looking forwards to these sessions, and I have now added a new one to the original two (see below for details). They will be approximately 4 hours long, starting at 10.30. We’ll start by exploring the area nearest the basecamp, which I’ll have scouted out beforehand. We’ll then take our finds back to the base to have a good look at them and make sure everybody knows how they were identified, and then have a wild-mushroom-based lunch. After that we will head out for a second forage, this time going further afield into areas I will have not scouted beforehand, so I won’t know what we’re going to find, or where. Finally we will return to the base, go through what we found, and we will cook up all the finds on the campfire. 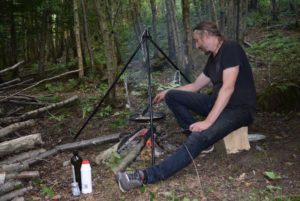 These sessions are an introductory price of £45 this year (they will be £65 next year).

Fungi season 2018 is now up and running and it is looking good. Have fun and stay safe!