This creation is very loosely based on a dish by Lukas Pfaff. I couldn’t afford a suckling pig, so I re-invented it (today) using a much cheaper cut of meat. 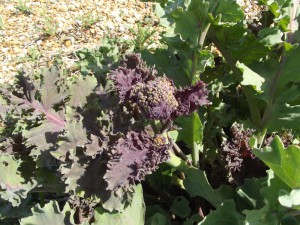 The key foraged ingredients are sea-purslane, which can be found by the ton on just about any salt marsh or river estuary in the country, and wild fennel, which is a bit harder to track down but can be locally quite abundant, especially in coastal areas. I accompanied it with some sea kale which just happened to be in area I was foraging. 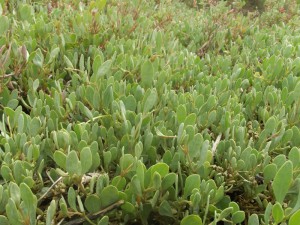 1) Wash the sea-purslane. Take half of it and spread it at the base of a casserole dish.

3) The belly joint will usually come rolled in string, which makes the first part of the process easier: use a sharp knife to cut the joint into 4 strips. Remove the string, unroll the strips and place them on top of the fennel, skin side up. 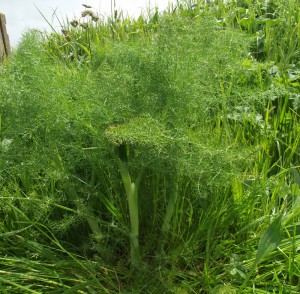 5) Pick the leaves off the stems of the other half of the sea-purslane. Keep for later.

6) Just before the three hours are up, start steaming the fennel stems, and put the potatoes on if you want to serve with mash. Add the sea kale a little bit later if you’re serving that too.

7) Take the belly strips out of the casserole dish, put in another dish and return to the oven to keep warm (turn the oven down low).

8) Take the layer of fennel out of the casserole dish (doesn’t matter if some bits escape). If you can get any juices out of the fennel, then add them back into the dish.

9) The dish will now contain the meat juices, including plenty of oil, and some very well-cooked sea-purslane. Use the back of a wooden spoon to mash the sea-purslane into a pulp, in the oils and juices from the meat, to make a sauce (you may want to remove some of the oil first, if there’s too much). Put the sauce in a jug and put the jug in the oven to keep warm. 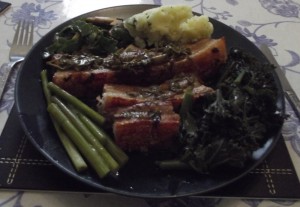 10) Heat some butter and olive oil, and plenty of freshly ground sea or rock salt, in a frying pan and then fry the belly strips, skin-side down. This is purely to make the skin go crackling-like and should take about 4 minutes.

11) Meanwhile, in another pan, sauté the second half of the sea-purslane for a couple of minutes in butter and/or olive oil. I also fried some mushrooms to go with the dish.

12) To serve, place the belly strips with their crackling side sideways, and drizzle the sea-purslane sauce over the top. Serve with the sautéed sea-purslane, mashed potato, steamed wild fennel stems (with plenty of butter) and optional sea kale (with plenty of lemon juice).

Sorry about the poor quality photo – I was in a bit of a rush to try my new creation! 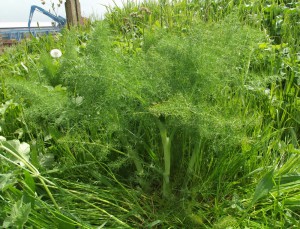 Wild fennel is not a saltmarsh plant, although its preference for coastal and riverbank locations means it can often be found nearby.  Late spring is the best time to pick it, while the stems are still soft and juicy. You can use the whole plant as if it was the familiar version, although obviously the wild plants don’t have the mutated swollen stems of  domesticated “florence fennel.”

Saltmarsh itself is a rich source of foraged food right through the spring and summer months, although the selection of plants available changes as the year progresses.  This year’s extended winter has meant that the marsh samphire which would normally start to be available by now is still too small to collect, but there are plenty of other edible plants to choose from.  In fact nearly all of the saltmarsh plants are good to eat.

Here are three of the best. 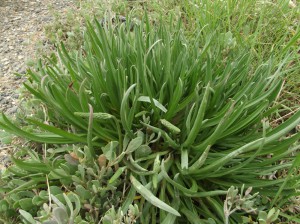 The first is sea plantain, which is a relative of the more-familiar and also-edible ribwort, greater and hoary plantains, and by far the best for eating.  The flavour is a bit like chives. Please be responsible/sensible when collecting this species.  While I was searching for (and failing to find any) usable marsh samphire, I passed through a location where all of the sea plantain had been taken, presumably by a person who was collecting for commercial purposes, judging by the amount that had been taken.  This person clearly couldn’t be bothered to walk further than 20 metres from the nearest carpark, and had stripped stripped one location of sea plantain instead of taking just a few from each place.  I might also add that this location was also inside the boundary of an SSSI, from which nothing should be foraged at all, especially when a slightly longer walk takes one outside of that SSSI. 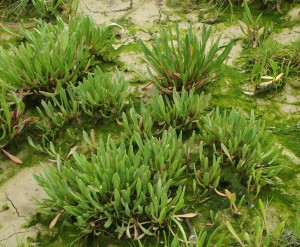 The second is sea lavender, which is a complex group that only botanists stand much chance of identifying to species.  It looks like a fleshier version of sea plantain, although it is unrelated and has completely different flowers.  The third is sea purslane – a super-abundant relative of marsh samphire (though you wouldn’t guess to look at it.)  Sea purslane is available all year round, but is also at its best in the late spring and early summer.

These four species I combined in roughly equal amounts, and then popped in the microwave on full power until the fennel stems were just cooked, but still a bit crunchy (about three minutes for the two portions shown below).   No additional salt is required, because the saltmarsh plants are naturally salty. I used the leaves of the fennel as a bed for cooking the lemon sole for which these wild vegetables formed an accompaniment. 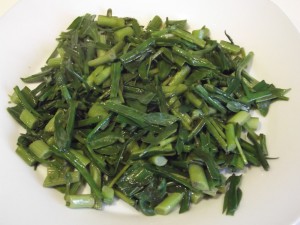