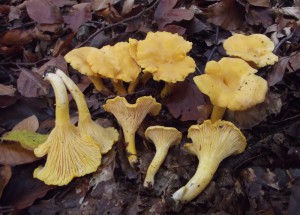 It’s been a superb October for fungi…if what you were after were members of the Cantharellales. If you were hoping for something else, it’s been somewhat less impressive. Yet again, the wild fungi have demonstrated that the only thing that isn’t surprising about their behaviour is their enduring capacity to surprise.

It was a good start to the season. From late August to mid-September there was a nice selection of brittlegills, milkcaps, agaricuses and large boletes to be found – typical fare for that time of year. It was also obvious from the get-go that it was going to be a stunning year for Cantharellus cibarius – I’d seen more Chanterelles by the middle of September than I had in the last four years put together. 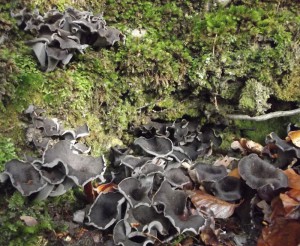 Then we had a period of dry, warm weather and almost everything ground to a halt. I have been waiting for the recovery ever since, and there’s still no sign of it. Trekking through the woodland of Sussex and Kent this afternoon, you’d be forgiven for thinking it hasn’t rained in weeks, at least as far as the fungi are concerned. Nearly all the major groups of fungi are absent entirely. I was out for three hours today and I saw not a single Amanita, brittlegill, russula, Agaricus, puffball, webcap, deceiver, honey fungus or oyster mushroom. And the only bolete I found was a solitary Peppery Bolete. 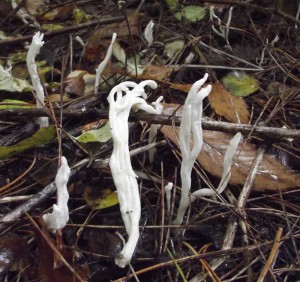 There are some good edible things still to be found in numbers, and they all belong to the same taxonomic Order (an order is two levels above genus – humans belong to the order “primates”). That Order is called Cantherellales, and in addition to the Chanterelles (family Cantherellaceae) it includes a variety of other fungi including the Hedgehogs (Hydnaceae) and a family of club fungi called Clavulinaceae that look entirely unrelated to the well-known Cantherellales but have recently been moved there as the result of DNA testing. One unexpected advantage to situations like this is that I go to the bother of experimenting with what is available, and it turns out that Wrinkled Club – widely dismissed as not worth collecting – is rather good to eat! Perhaps not so surprising given that so many other things in its order are considered to be delicacies. 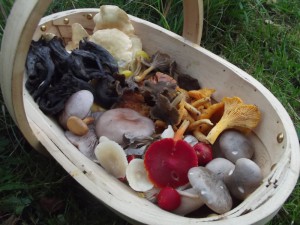 My afternoon was rescued slightly right at the end by a trip to a local churchyard. Even here, things were not quite as you might expect for the end of October, but there were at least a few other things – a patch of Wood Blewits, another of Clouded Funnel, and few scattered waxcaps where last year there was a carpet.

So what on earth is going on? I have no idea why it is such a special year for the Chanterelles and their allies, but one thing this group tend to have in common is that they are slow growing and long lasting. That this was going to be a classic year for them was already decided long before the weather turned unseasonally warm and dry in mid-September. They also last for a long time once fruited, so the large numbers of Chanterelles, Horn of Plenty, Hedgehogs and Wrinkled Clubs were already growing before the weather changed. The other autumn fungi fall into two categories from where we currently are – the late summer and early autumn species, which had already fruited their hearts out by mid-September, and the later autumn species which hadn’t even got going. And even though November starts tomorrow, the average temperature hasn’t got low enough to trigger their fruiting. At least, that’s the best theory I can come up with, and if I am right then as soon as the temperature drops significantly there should be decent recovery, and maybe fungi all over the place.

So we must wait for the temperatures to drop, and see what happens. Unfortunately, the current long-range forecast is showing temperatures staying unseasonally high, well into November. Here’s a prediction: this mushroom season will see a second peak in the third week in November…

6 thoughts on “The Cantharellales rule supreme”