I grew up in a converted victorian stable with a large garden which spent most of its time mostly overgrown. Each spring, round the side of an old outbuilding, a strange plant would burst forth and claim an ever-increasing patch of ground for itself. It did not restrict itself to claiming patches of soil either. No – this plant also habitually smashed its way through the concrete of the adjoining pathway. “Triffids”, my mother called them, because of their aggressive nature, rather sinister looks and their point blank refusal to be eradicated. They weren’t at all pretty – although the victorians clearly felt otherwise, since they were responsible for introducing them in the first place, as garden ornamentals. They are, however, rather tasty. 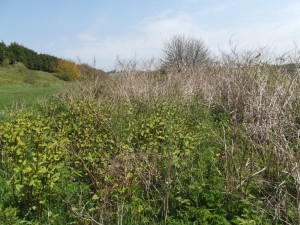 Japanese Knotweed in early May, with dead canes from previous year.

If you haven’t already guessed, I’m talking about Fallopia japonica or japanese knotweed, which is known in its home territory as “the strong one”, and it’s at its best right now. This species and its close relative giant knotweed (F. sachalinensis), about which everything I’m writing also applies, are at least as well known in the building/surveying trades as they are to gardeners and foragers. It is an offence to introduce them into the wild in the UK and an offence to dispose of them anywhere other than licensed sites. They have been known to appear in people’s living rooms, having broken through the foundations of a newly-built house. Their presence of private property will negatively impact the value of that property, or even lead to a sale falling through. They are, in short, very bad news. Unless, that is, you would like to forage for a versatile and abundant wild food! 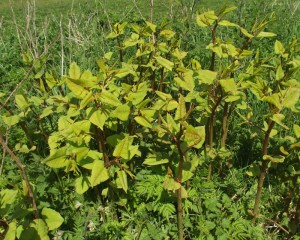 Knotweed’s primary use as food is sweet, where these species can be used in any recipe in place of rhubarb. It would be misleading to say it is exactly the same as rhubarb, because the taste (less tart) and texture (less stringy/gritty) are both very slightly different, but still close enough that no recipe using rhubarb needs to be changed if you’re using knotweed instead. A quick online search for recipes will also turn up uses in curries and flans and gratins – indeed it is quite obvious from tasting that it may well be used in both savoury and sweet dishes. On its own it is still very tart, and requires the addition of sugar or some other sweet ingredient. 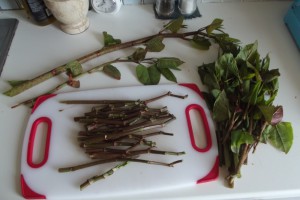 Knotweed comes with two warnings attached. The first is that it contains oxalic acid, which means it should not be consumed in large quantities and should be avoided by people who suffer from kidney problems, stones or gout. This is not much different to the warning that comes with rhubarb itself. The second problem is a direct consequences of its status as a pest plant: there is a very real possibility that somebody may have sprayed with human-toxic herbicides any knotweed you find growing wild. So you must use your own common sense with this one. If there is any sign of weedkiller use anywhere near the knotweed then leave it well alone, and if possible you should check with the landowner or local authority whether any has been used (although this may be easier said that done.) 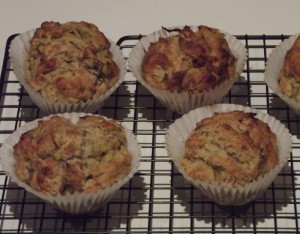 Knotweed muffins. Recipe was for rhubarb muffins, with the knotweed directly replacing the rhubarb. And no, I didn’t bake them. Thanks to Cathy Relf (Twitter: @CaffyRelf) for that!

The leaves can also be eaten, but the best part to use is the young stems just as they start sprouting (which is right now). Later in the season you can still use the top 10cm of each shoot, but it becomes a bit of a bind to pick in quantity. And the best thing about this plant is that you can take as much as you like, because nobody is likely to complain about you eradicating it from any particular locality. Some people have made a case that it provides cover for endangered native reptiles, but on balance we’d certainly be better off without these two species marauding about the British countryside.

4 thoughts on “The Strong One”