It’s a hard life.  Day after day traipsing around lush woodland cloaked with bluebells and wood anemone in search of edible fungi and not finding any.  Almost makes me wish I had my old day job back. Not.

It has felt a little like being a beginner once again though.  Having moved from Brighton to Hastings last summer, I’m foraging in entirely new territory and that means I don’t know anywhere round here where I know I can find certain things if they are about at all.  So I have spent the past three weeks searching in vain for a local source of St George’s Mushrooms (not even pretending to hope I’d come across the Holy Grail of some morels).  I know via twitter and various forums I post on that people have been finding St George’s since February this year, although it would seem these finds are “outliers”, because there have not been a large number of sightings.  Perhaps after two good years for this species we are due a poor one.  But perhaps they have not been fooled by the early spring and they’ll start appearing en-masse at their “normal” time over the next couple of weeks. 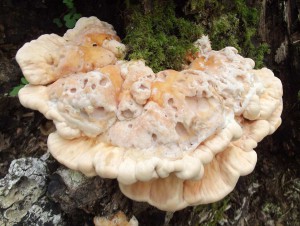 Anyway – my luck has changed in the last two days.  I may not have found what I was looking for, but I have started finding plenty of other stuff instead.  These have included the cup fungus Peziza vesiculosa (Blistered Cup) and some Coprinopsis Inkcaps, both of unknown/disputed edibility, and two well-known edible species – Dryad’s Saddle and Chicken of the Woods.  I’ve never found the latter in April before.  It usually starts to appear about the end of May or the start of June.  The one I found today was still very soft, and looked like it had been growing for no more than about a week.

Chicken of the Woods is one of the safest of the wild fungi for people to pick due to it not being confusable with anything poisonous.  It does resemble a larger relative called Giant Polypore, but that species is only inedible because it is so tough and bitter.  They are reasonably easy to distinguish by smell – Chicken of the Woods smells and tastes like chicken, and Giant Polypore doesn’t.

As for what to do with it, I’m yet to find anything that beats frying it in butter then adding double cream, chives, paprika, salt and pepper.

Happy hunting, stay safe and if anybody reasonably local can point me in the direction of some morels then I’d be happy to offer two free autumn foraging sessions in return!