Gracilaria is a genus of red seaweed much better known as food in Japan and Hawaii than in Europe, where in some places they have been foraged out of existence. In Europe there is no history of consumption (even in these post-foraging-revival times). The English name is the unattractive “wartweed”, so I generally use the Japanese common name of ‘Ogonori’. There are a number of very similar species, mostly found in sandy areas, especially where there is running 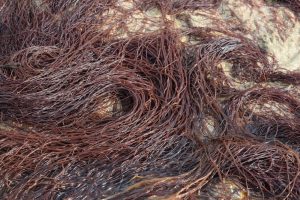 water when the tide is out, and in areas only exposed during very low spring tides. They can be found all around the British coast, from spring to autumn. All of them consist of long, straggly annual strands, which grow from a perennial holdfast (so cut them off instead of pulling them up!). They should not be confused with the many red seaweeds which have much finer hair-like strands, or are more branching and angular. Although this is only a matter of taste and texture — there are no poisonous lookalikes. The species used here is Gracilaria gracilis (Slender Wartweed).

The recipe included here is taken from my recently published book Edible Plants. It has proved a firm favourite on my coastal foraging courses. It started out as a fusion of traditional Japanese and Hawaiian recipes, but has been evolved and refined sufficiently over the years to the point where I can claim it as my own recipe. If you would like to try it then I am planning on serving some at the book signing event at City Books in Hove at 6.30pm on Thursday March 31st. 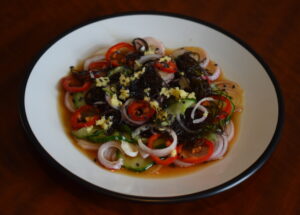 Method: Slice the cucumber thinly, cover with salt, leave for 20 to 30 mins, then drain and pat off any excess salt. The goal is to get rid of as much water as possible – gently squeezing will help. Mix the rice vinegar, soy sauce, sesame oil and honey to make a dressing. Optionally chop the Gracilaria into 4-5cm lengths (this makes it easier to eat using only a fork, which is what we do when this is prepared on the beach). Blanch the ogonori in boiling water for 40 secs (it will turn green), then immediately rinse in cold water, to keep it nice and crunchy. Place a layer of salted cucumber, sliced shallots and chilli in a circle on a plate. Mix the ogonori with the chilli and ginger, and place in the middle of the circle. Pour the dressing onto the mixture, and garnish with sesame seeds.