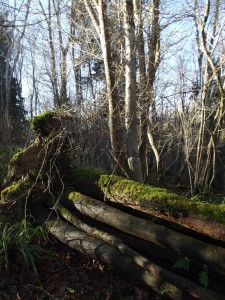 There couldn’t be bumper years for fungi if there weren’t also duff ones. 2015 was a duff one. As explained in the previous post, the start of the season was promising and it was a great year for Chanterelles and Horn of Plenty, but after that it just went downhill and stayed there. Last October was also a bit dodgy, because it had been too warm, but there was a recovery in November. This November was the worst for fungi, both in terms of variety of species and number of actual mushrooms, that I can remember. It also ended early – in a normal year I’d still be out picking Winter Chanterelles now, but they stopped growing several weeks ago and now there’s none of those left either – not in good enough condition to pick, anyway.

On the bright side, it bodes well for next year. When a particular species of fungus has a bad year, it often does well the following year, and when all the fungi do badly then lots of them will do well the following year. I don’t expect to see many chanterelles, but there’s likely to be plenty of other stuff. Which would suit me just fine, given that I’m going to spend most of next autumn launching a book on fungi foraging…of which I have some news, because a decision has now been made on the title and release date.

The book is going to be called “Edible Mushrooms: a forager’s guide to the fungi of Britain and Europe” and it will hit the bookshops on Thursday September 29th. It will feature over 250 edible species and 50 poisonous ones, covering the whole of the temperate and mountainous areas of Europe (that is, everywhere apart from the Mediterranean climate zone and biome south of the Alps and Pyrenees, where the fungi are significantly different).

Some other news for next year: I will be running open-to-the-public sessions in Hemsted Forest (half way between Tunbridge Wells and Ashford). See link at the top of the page for details.

Enjoy your Christmas and see you next year.

One thought on “Oh well, there’s always next year…”