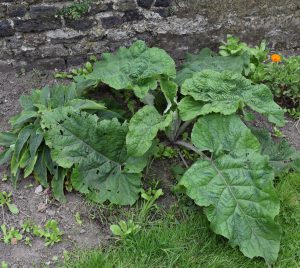 One of the great joys of foraging is trying something new and finding out it’s delicious. Sometimes it is something you’ve never found before, or at least never recognised (this is particularly likely with fungi). In the UK there is also another obstacle to trying certain new things, and that is the law that uprooting wild plants without the landowner’s permission is illegal. In some cases this law is a bit irrelevant – nobody is going to notice or complain if you dig up a few Lesser Celandine tubers, for example. They are ludicrously common and abundant, and the tubers are like miniature potatoes, except not far beneath the surface. Burdock is a bit different, especially Greater Burdock, which is a big plant with a big, edible taproot. Not the sort of thing you can just casually uproot and wander off with, without anybody noticing. 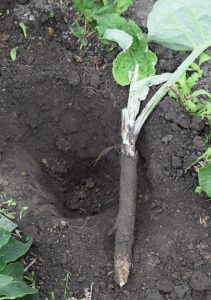 Burdock is, of course, one of the best known of all British wild foods, because it has been combined for centuries with Dandelion to make a beverage, originally alcoholic, usually a soft drink these days (although the drink you’ll find on sale today rarely contains any of either plant). It is well known in herbal medicine also, and claimed to be of use for a wide range of ailments, especially those afflicting the liver.

Burdock is a biennial – it starts growing in the summer of one year, then overwinters in a dormant state before maturing, flowering and setting seed the following year. So when last autumn I noticed one had taken up residence in a flower bed in my back garden, I decided to just let it grow, and harvest it once it had started to become a nuisance. They are supposedly best when harvested around midsummer, but this one was getting too big for its location and so this afternoon I decided to dig it up and try eating it. 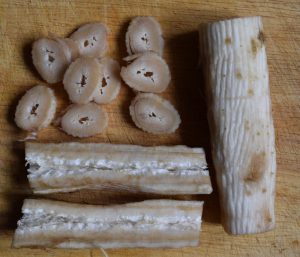 Digging up a Burdock taproot turns out not to be so easy. This one hadn’t even finished growing, but it was still presented a challenge to dig up that comes second only to Horseradish in my personal experience. The main root went well below the deep layer of topsoil and into the thick, sticky clay below. My fork didn’t survive the process, and I eventually had to use a hand trowel to excavate as far down the root as possible, before giving up trying to extract the entire thing undamaged and just pulling has hard as possible. Most of it came out. I presume, and rather hope, that it won’t grow back from the remnant that remained in the ground.

So what to do with it? The leaves were inedibly bitter, but the central part of the stem made a perfectly acceptable snack, briefly microwaved with a bit of butter. The main event was that taproot, though. I had read somewhere that most of the flavour was in the skin, and so to try to remove the dirt with the back of a knife under running water. It proved a bit too dirty and knobbly for this, so I ended up using the blade of the knife and lost quite a bit of the skin. 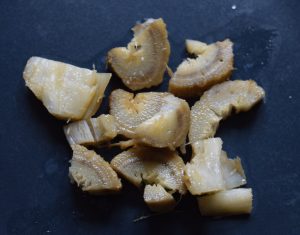 Steamed Burdock root, with a bit of butter

I tried three different ways of cooking it. Firstly I just microwaved it, with a little butter. This worked quite well, apart from it being tricky to get the timing right. Too short a time and it was a bit tough, too long and it was a bit dried up and crispy. Obviously the “correct time” depends on how much you are microwaving. It is therefore probably better to steam it, since the timing is more consistent and you can just poke it with a fork to see if it is ready. It took about eight minutes to be just right. Again I served with a bit of salted butter, and it was superb. Perhaps a little stringy around the edges, but the taste was delicate and delicious, very similar to Jerusalem Artichoke (to which it is distantly related). Burdock Root is packed with nutrients, especially Vitamin-C and Vitamin-A, and this is one of those wild foods that actually tastes like it is good for you. 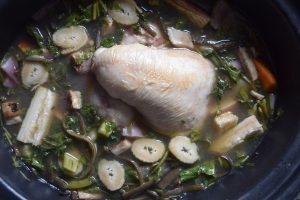 Poussin casserole (just getting going in a slow cooker), with Burdock root (and other stuff…)

Finally I popped it into a poussin casserole that was already bubbling away in my slow cooker. This was one of those casseroles containing whatever happened to be available in my fridge/garden, which included a number of other wild foods. There’s some Sweet Cicely (Myrrhis odorata – a member of the Carrot family with a rich, aniseed smell), some Dryad’s Saddle (Polyporus squamosus – one of the few spring-fruiting edible wild fungi) and some Sea Spaghetti (Himanthalia elongata – a seaweed which thickens and adds a bit of umami to a casserole like this). 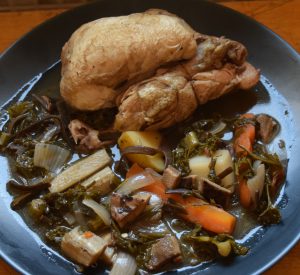 The verdict: excellent, especially steamed as a side vegetable and in the casserole (and presumably therefore all manner of soups and stews). In the casserole it works better sliced into sections, rather than in lengthwise segments, so the slightly stringy bits near the edge are less noticeable. But I am an instant convert – this is a first class edible wild plant. If only it was easier to get out of the ground!

If you’re interested in joining a spring foraging course where we’ll (hopefully) be digging up and cooking some Burdock root, there’s still some places left at Bay Tree Cottage in Northamptonshire, this coming Saturday, May 13th.