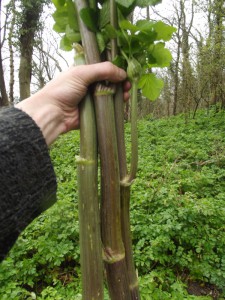 Alexanders (Smyrnium olusatrum), or Rock Parsley of Alexandria, to give it its older and grander name, is without doubt the best edible “weed” throughout the winter, and is just now reaching its best. One of the many plants brought here for food by the Romans, this member of the carrot family was grown in English gardens well into the 18th century, before being slowly displaced by modern forms of celery. It is now almost entirely forgotten, although I really have no idea why, because it is delicious. It’s sort of like celery (but to be honest I don’t particularly like celery, especially cooked), and a bit like parsley and a bit like carrot (tastewise), but really it is none of the above. It’s alexanders, and the stems are at least as good as anything you can buy in a supermarket, but with the added advantage of being entirely organic, and free!

The whole plant is edible – roots, stems, leaves and buds. The peeled stems just happen to be the best part, at least at this time of year. The buds are a bit like broccoli, but slightly bitter, and also available now. The plant continues to be edible until about midsummer, by which time it tends to get a bit stringy and tough, and other wild plants are available as food.

It can be found around most of the coastal areas of the UK. Precisely why it does so well on the coast, while only surviving in a few location inland, is not clear. All I know is it grows in great profusion all along the coast of Sussex between Worthing and Hastings, and doubtless for a very long way in both directions from here. 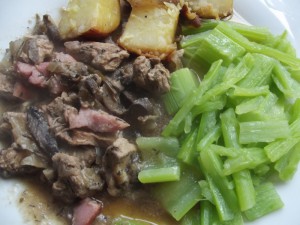 It is not hard to recognise, although it comes with the standard caution that applies to all members of the family Apiaceae (umbellifers): be aware that this family contains the two plants that are responsible for nearly all wild plant deaths in the British Isles. The two species in question are hemlock and hemlock water-dropwort, neither of which closely resembles alexanders, but both of which need to be in the consciousness of any forager who is interested in eating umbellifers. So if you don’t know them, just look them up before you go searching for alexanders.

This lot ended up served with roadkill pheasant casserole.