Well, that was the winter that seemed like it would never end, but the sun is currently beating down on the English south coast, and it has been a good few days for me, foragingwise. A couple of days ago I broke my morel hoodoo. Well, strictly speaking it wasn’t me who broke it… People often ask me if all of the photos in my book are mine, and my answer is that over 95% of them are. But almost without exception, the 5% that aren’t mine are of species I stood little or no chance of finding in England anyway. The biggest exception were the spring-fruiting morels, for which I have been searching in vain for over thirty years. The two famous edible European morels (Morchella esculenta and elata, Common and Black) aren’t that rare. Other people seem to find them. But spring after spring I’ve been out looking for them, and wherever they were fruiting was somewhere I wasn’t. 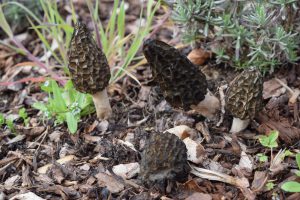 Then on Monday evening, a friend of mine tipped me off that he’d spotted some morels growing in a flowerbed somewhere on the campus of Sussex University, and I agreed to meet him there the following afternoon. He had told me exactly where to look. I went to the location, looked as hard as I could, and could see no morels. He was late. Eventually I decided that the Mushroom Gods had decreed that I would never see a morel growing wild, and began trudging home empty-handed. Five minutes later my phone rang and it was Tim, asking me where I was. I told him that the morels had gone, and he replied that that was very strange, because he was looking at them right now. So I went back, and there they were, about ten Black Morels growing exactly where I’d looked 20 minutes before. I have to wonder how many times I have looked right at them and my visual system has “edited them out”. Anyway, having now actually seen them growing wild, I am hoping the spell is broken and that I will find many more. Including some Common Morels, which are more highly ranked than these black ones, and which are now the only important British edible wild fungus I am yet to encounter.

The second wild food that’s been crossed off my list in recent days is Hop shoots. I have seen 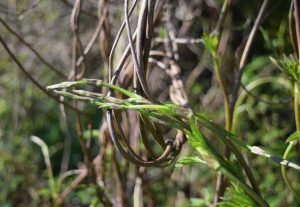 plenty of Hops before – but I’ve never found them anywhere close to where I live, and it has always been in the summer or autumn when the plants have their characteristic flowers (famous for their use in beer making), by which time the shoots are shooting no longer. Spotting them at this time of year if you do