Last year year spring came three weeks late. This year could not be more different – in fact down here on the south coast winter hasn’t arrived at all. If I recall correctly we have had just one just-about ground frost, back in the middle of December. Instead we’ve had the wettest January for over a century and much of the country is underwater. And if there wasn’t enough misery to go around, yesterday and today’s spring tides have made things even worse (“spring” here just means they are extreme – they are “springing about” – not anything to do with the seasons). 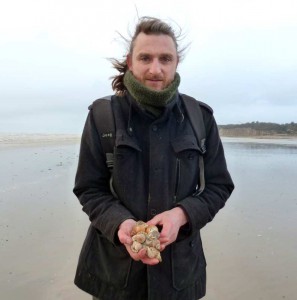 Geoff with some whelks. Spring low tide at Pett Level.

Still, it’s an ill tide that brings nobody any good. If there is a spring high tide keeping water in the rivers then there’s also a spring low tide, and that means an opportunity for a forager to get his or her hands on some shellfish that remain out of reach most of the time, even at low tide. This morning’s low tide was at half past seven, just as the light was good enough to go searching for razor clams at a local beach where I’ve seen razor clam shells. It just stopped raining as I left the house, tub of salt in hand. Unfortunately, I could find no key-hole-shaped razor-clam holes to pour the salt down.

However, my time was not wasted. Apart from it being a lovely way to start one’s Sunday, there is plenty of interest to be found on Pett Level beach at low tide. Probably the strangest is the exposed beach itself, which consists largely of a “carpet” of bits of ancient wood, the remains of a forest that stood there six millennia ago when sea levels were considerably lower. It has not been studied in any great detail, and very little is known about it. Not much use to a forager though. 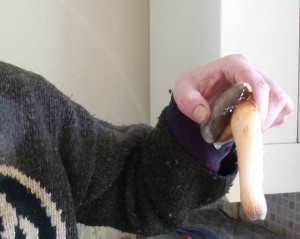 Also not much use to a forager, one might think, is the wreck of a 70-cannon warship, The Anne, scuttled there in 1690 after the Battle of Beachy Head to prevent the French from getting hold of her. Worth a look though, and is it turned out, the best place to find shellfish on the whole beach. The exposed timbers were plastered with (apparently dead) starfish, but were also providing a home for some whelks. These are a rare treat for a forager, usually inhabiting deeper water and out of reach to anybody on foot. They were only just accessible and would have been safely back beneath the waves within an hour of the tide turning if I hadn’t nabbed them first.

Along with the whelks was one of the oddest of British shellfish: our largest clam, Mya arenaria, aka the sand-gaper. Tastes great, but it isn’t much of a looker. The problem? No way to avoid this – the problem is that it has what looks like a large, flaccid penis sticking out of its side. This also happens to be the tastiest part of the animal. 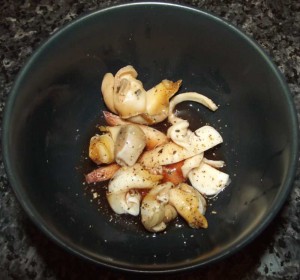 Anyway, I got one sand-gaper and enough whelks for a starter for two. They are easy enough to prepare. Leave them in a bowl of salty water for a few hours, changing the water a couple of times. Then boil the whelks for ten minutes, and steam the clam at the same time. Remove from shells, clean the clam, and serve with vinegar, salt and pepper. Yum.